Fairytales, though often universally beloved, can be challenging to bring to life on stage. Finegan Kruckemeyer’s modern fairytale This Girl Laughs, This Girl Cries, This Girl Does Nothing is no exception. This challenge was met with undeniable gusto in its latest rendition produced by The Scoundrel & Scamp Theatre. The energy brought to this performance by the entire ensemble electrified the audience, both children and adults.
Unlike the fantastical journey we’re about to take with three sisters, the audience is greeted by a minimalistic set, dressed only with a few leafless trees and bathed in moonlight. The silence of the scene is only broken by Immanuel Abraham’s (Music Director and Composer) violin and sweet, soft music.

Then we meet our three heroines—Albienne, Beatrix, and Carmen. They are surrounded by joy, comfort, and love. But after the death of their affectionate mother, their woodcutter father leaves them in the woods. They each decide to venture down different paths of life, and separate with the intention of returning to each other. Albienne traverses the globe in one direction, and Beatrix, the other. Carmen stays right where she is.
Albienne, portrayed by Felíz Torralba, has an unassailable passion for pastries and an irrefutable talent for baking and a surprising strength in battle. Torralba, with a glowing smile, brings a gentle warmth and a strong presence to her character. Her smile makes you smile. Her joy brings you joy. Torralba makes you care for this wondrous girl who is a feared warrior, and a renowned baker. The second sister, Beatrix, follows the direction of her father with the hope of bringing her own bright energy to the dark places of the world. Gabriella De Brequet is no stranger to playing characters deserving of bountiful energy. With a silly, and often, hyper disposition, De Brequet generously gives to this ensemble. She charges into the production, ready to take you with her. Finally, Carmen—played by Nicole DelPrete—who stays within the woods to care for those who cannot care for themselves. DelPrete is readily received by the audience as her portrayal of this sardonic character brought countless laughs and even affectionate tears to everyone. Her various ensemble roles also carried a similar tune of whimsical sarcasm. The audience quickly let their affections for her be known. Claire Hancock and Leora Sapon-Shevin who round out the ensemble, were clear stand-outs. Both fluidly moved between countless characters with impressive polarity. They are sure to make you laugh! 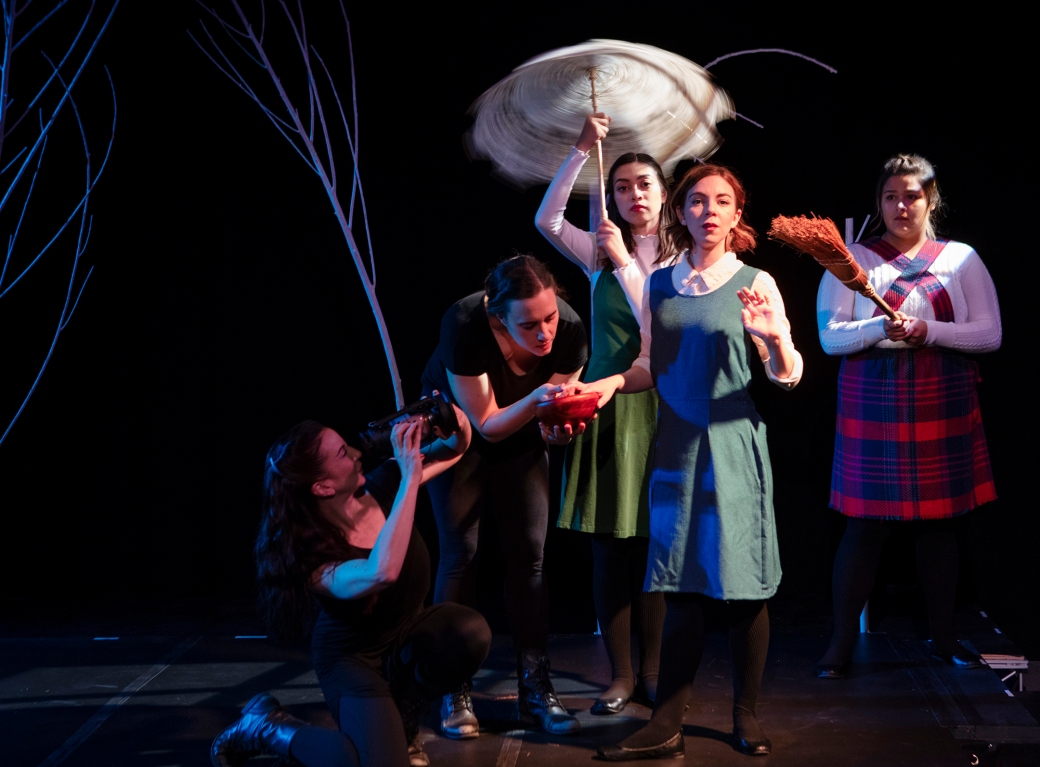 The cast of This Girl Laughs, This Girl Cries, This Girl Does Nothing. Photo by Tim Fuller, courtesy of The Scoundrel & Scamp Theatre.

The strength of this ensemble is anchored by director, Holly Griffith. It was C.S. Lewis who said “A children’s story that can only be enjoyed by children is not a good children’s story in the slightest.” Griffith made this production accessible not only to the laughing children in the audience, but to their parents and other adults who laughed with them. She shrewdly employs the use of old-fashioned children’s toys as stage props to nourish the theme of children playing make-believe. Incidentally, the aesthetic of the play was reminiscent of the make-believe games I played when I was a child. The nostalgia is palpable.
What makes this fairytale so special is not just the entertainment it brings to its audience, but the strength it encourages in its viewers, particularly its female viewers. It takes on the fundamental challenge of producing a fairytale which is the difficulty of taking two-dimensional concepts and placing them in a three-dimensional world. Old children’s stories often require even more suspension of disbelief which can generate unrelatable themes and characters. This does not, however, hold true for Kruckemeyer’s fairytale nor for this production. With an almost all female cast and crew, this play defies the stereotype of the damsel-in-distress. Instead, our heroines exhibit strong wills coupled with compassionate spirits. These three sisters had one thing in common, a need to help others—which is admirable, though one extremely valuable lesson is learned: you don’t have to burn yourself to keep others warm. This moral is wrapped up in hijinks and clever comedy.
The Scoundrel & Scamp’s production of This Girl Laughs, This Girl Cries, This Girl Does Nothing is a hilarious fairytale with a heartwarming story that can be enjoyed by all ages. You’ll want to bring the whole family! The show runs through Sunday, November 25th (complete schedule below) at The Scoundrel & Scamp Theatre at The Historic Y (738 N 5th Avenue, Tucson, AZ, 85705). Tickets are available at scoundrelandscamp.org/this-girl-laughs or by calling the box office at 448-3300.
Showtimes:
Sunday, November 18 @ 2:00 p.m.
Saturday, November 24 @ 2:00 pm
Saturday, November 24 @ 7:30 pm
Sunday, November 25 @ 2:00 pm

Editor’s Note: Bryn Booth has performed with The Scoundrel & Scamp Theatre in past production and does have personal relationships with a few of the cast members and the director. While she had no input or involvement within this production, we feel it is important to disclose any potential biases.