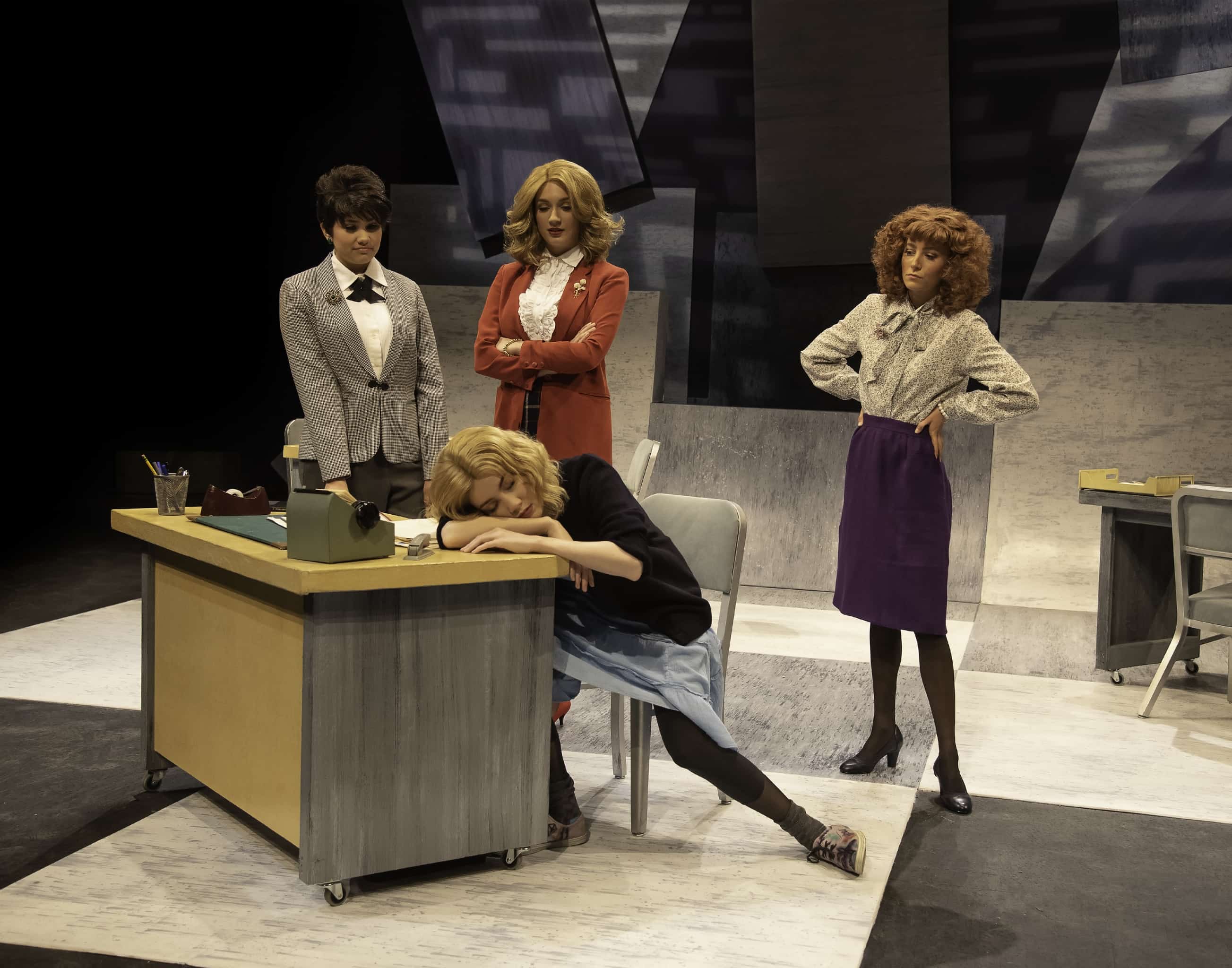 The play opens with a challenging scene, where the central character Marlene, played by Rebecca Galcik, hosts a dreamlike dinner party for six women from history. Some are real historical figures, some are characters from folklore, but all arrive with stories to tell. Churchill writes the scene to be fast-paced, with many lines overlapping, as the women discuss their relationships with men and children, their adventures around the world, and their thoughts on religion and philosophy. It is a feast for anyone who has yearned for the advice and wit of those who have gone before us. Given the pacing, the larger than life personalities, the odd theatrical conceit, the difficult subject material, and the four different dialects used onstage, this is an extremely difficult scene to pull off, and a few moments were lost in the shuffle. As someone unfamiliar with the play, the scene was somewhat hard to follow, and I wished Morden had encouraged a slower pace and more demonstrative blocking where possible, especially near the beginning of the scene.

The remaining scenes of the play, however, are worth the wait. The play shifts time, place, and theatrical style, and we get a glimpse into Marlene’s life as a successful businesswoman, and the challenges that come with being a woman at the top. Six of the seven actors play entirely new characters, some of them multiple new characters, and Morden’s casting is masterful. Each actor slips into the skin of someone new, while retaining thematic vestiges of the dinner party scene. Elana Richardson’s Pope Joan character transforms into Joyce, the working class sister of Marlene. Richardson remains stoic, like her papal counterpart from scene one, but adds a downtrodden jadedness more appropriate for Joyce’s socio-economic situation. Eavan Clare Brunswick portrays the Scottish explorer Isabella Bird in the first scene with a proud earthiness, and later becomes Mrs. Kidd, a woman who tries to protect her husband’s job by desperately attempting to unseat Marlene from her high-powered position. While the earthiness of Isabella vanishes, the boldness and sense of pride remains. It was a joy to watch these shape-shifting women command the stage with ever more nuanced performances.

Perhaps the most exciting transformation is in the hands of Maggie McNeil. She arrives at the dinner party as the folkloric Dull Gret, a nearly-mute spud of a woman dressed in battle armor, who seems primarily concerned with getting more to eat. McNeil, with few lines, becomes a highlight of the scene, radiating with childlike curiosity and coarse table manners. The scene ends with an engrossing description of Gret’s brutish invasion of hell. In the following scenes, McNeil plays the devilish teenager Angie, who resents Joyce’s tough love approach to parenting. She captures the feverish energy of teen life without too much wackiness. McNeil’s Angie is magnetic, radiant, and frightening. McNeil plays two characters whose humanity is interrupted by violence, and she strikes that balance beautifully. 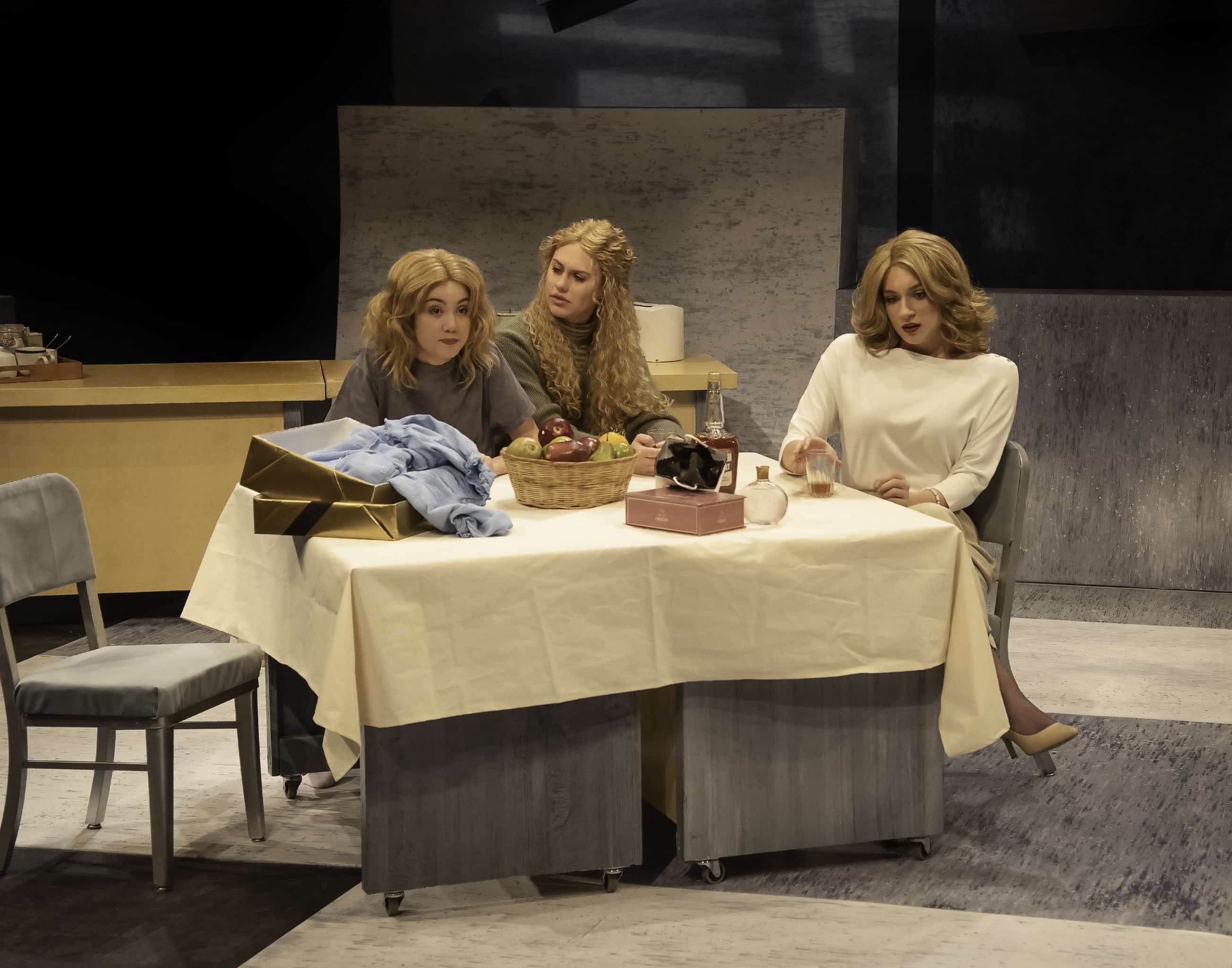 The final scene of the play between Marlene and Joyce is also stunning. Galcik and Richardson know this scene inside and out. The two sisters argue over the central problem of the play—Angie is really Marlene’s child, but was raised by Joyce. The two navigate the would-have, could-haves of their past, unearthing resentments and illustrating the nearly impossible situation that Womanhood has put them in. Their dialogue flows like a river, hitting high points and low points, splashing against barriers and overflowing with rising tension. The two perform the scene with an excellent handle on the rhythms of the language and the vulnerability of their characters.

A word on the technical elements of this piece. Allison Morones has a huge job costuming 7 actors as 16 characters, all of whom change clothes, and most of whom change hairstyle. With few missteps, the costumes fit seamlessly into their world. Even the myriad wigs, which can be distracting if not used well, are consistent in their strangeness. They function similarly to masks in this production, giving a tongue-in-cheek nod to the double-casting in the play. Additionally, director David Morden achieves an almost impossible feat of coaching at least four dialects, ranging from Scottish to Japanese. While some actors handled dialect more naturally than others (Eavan Clare Brunswick has executed 3 different dialects this season, all masterfully), I was impressed with the consistency and range of dialects onstage.

I want to take a moment to praise ART for producing not one but two plays this season with all-female casts. The technical and design team for Top Girls is also a majority of women. It is empowering to watch women hold space onstage for an entire evening, and it gives female artists a chance to work together in ways that are rare in the performing arts. At the same time, I wish the University had more female directors. While I applaud Morden’s work on Top Girls, it also occurred to me that white men will direct almost all the main stage productions at ART this season. I hope that the University will consider diversifying their staff, especially when it comes to faculty with directing qualifications.

Editor’s Note: While Holly is an adjunct instructor in the School of Theatre, Film, and Television, she has no relationship with any students involved in Top Girls, personally or professionally. Additionally, Holly has worked professionally with David Morden. While this does not impact how a performance is reviewed, we feel it is important to disclose any potential biases.