The 1800’s brought many influential things to Germany: Adolf Hitler, Nietzsche, The Brothers Grimm and the infinite creep factor of “Der Struwwelpeter” (Google it!). This is the backdrop for Arizona Repertory Theatre’s season finale, Spring Awakening. 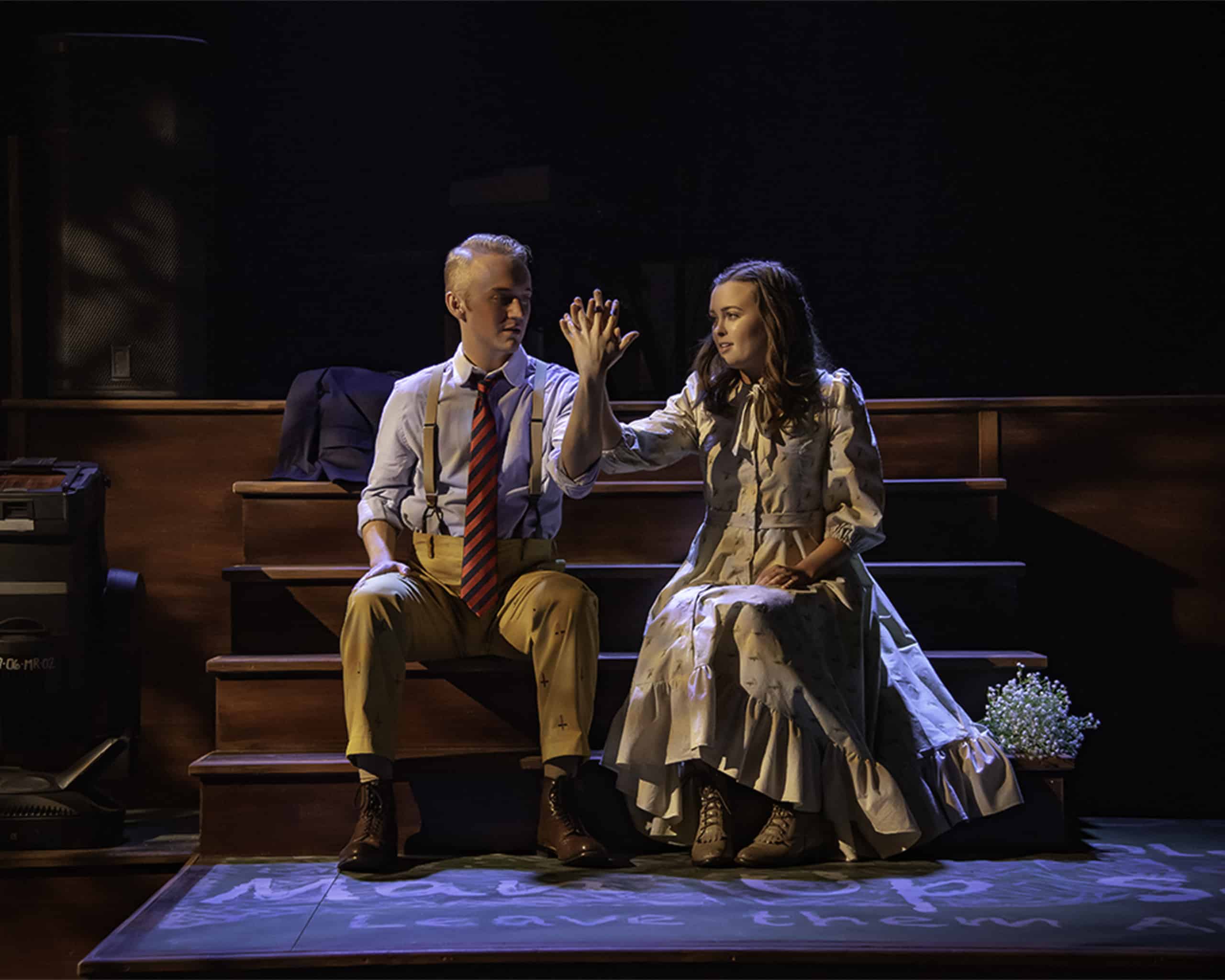 Spring Awakening is based on the late 19th century play The Awakening Spring, A Children’s Tragedy by German playwright Frank Wedekind. This modernized version is an austere depiction of oppression, rebellion, and sexuality, featuring maturing kids finding their bodies amongst shifting roles – girls drool over guys who don’t care about anything but are good at everything, while the guys suffer explicit fantasies about their piano teachers. Typical.

Spring is “a time to be born, a time to die; a time to plant, and a time to pluck up that which is planted…” (Ecclesiastes 3:1-8). In this lusty season of rebirth we find ourselves sowing metaphorical seeds for the future. Spring Awakening’s director Hank Stratton has expressed that it’s necessary to have death in order to have new life. And what is a more fitting way to celebrate Eostre, the Germanic goddess of spring, than with awkward teenage S.E.X.?

This multiple-Tony winning musical features Steven Sater’s cringy, angsty songs about new ways to touch oneself. But Stratton, according to his recent interview in the Arizona Daily Star, is okay with that. He “expects some audience members to be uncomfortable.” And well, it is.

Yet, this is a show of contrasts. While hopelessness pervades, a spirit of dissent runs almost as wild as the hormones. Though conscientiously directed, the obvious opposites within the script create scenes that are confusing but, in a way, accurate to that time when seemingly everyone was mystified by human sexuality.

The motifs in the story are predictable: adults vs. kids, sex vs. chastity, pleasure vs. pain. A bit cliché. How many times have we seen this story? Girl has sex, gets pregnant, and has a terrible life while the boy basically gets to be the bad ass. Though the narrative starts out strong and funny, it unfortunately flickers out.

While the script leaves something to be desired, there are key performances that pack a punch: much of the movement is purposeful and well timed – a particularly satisfying scene features caustic schoolmasters, headbanging, and air-guitars. And there were stand out vocals by actors Jared Machado (Georg/Dieter) and Rachel Franke (Wendla).
Another gem in the script is the queer love story. Its nuanced vulnerability adds dimension to a predominantly straight tale. This was an astute detail to add to an otherwise familiar story. 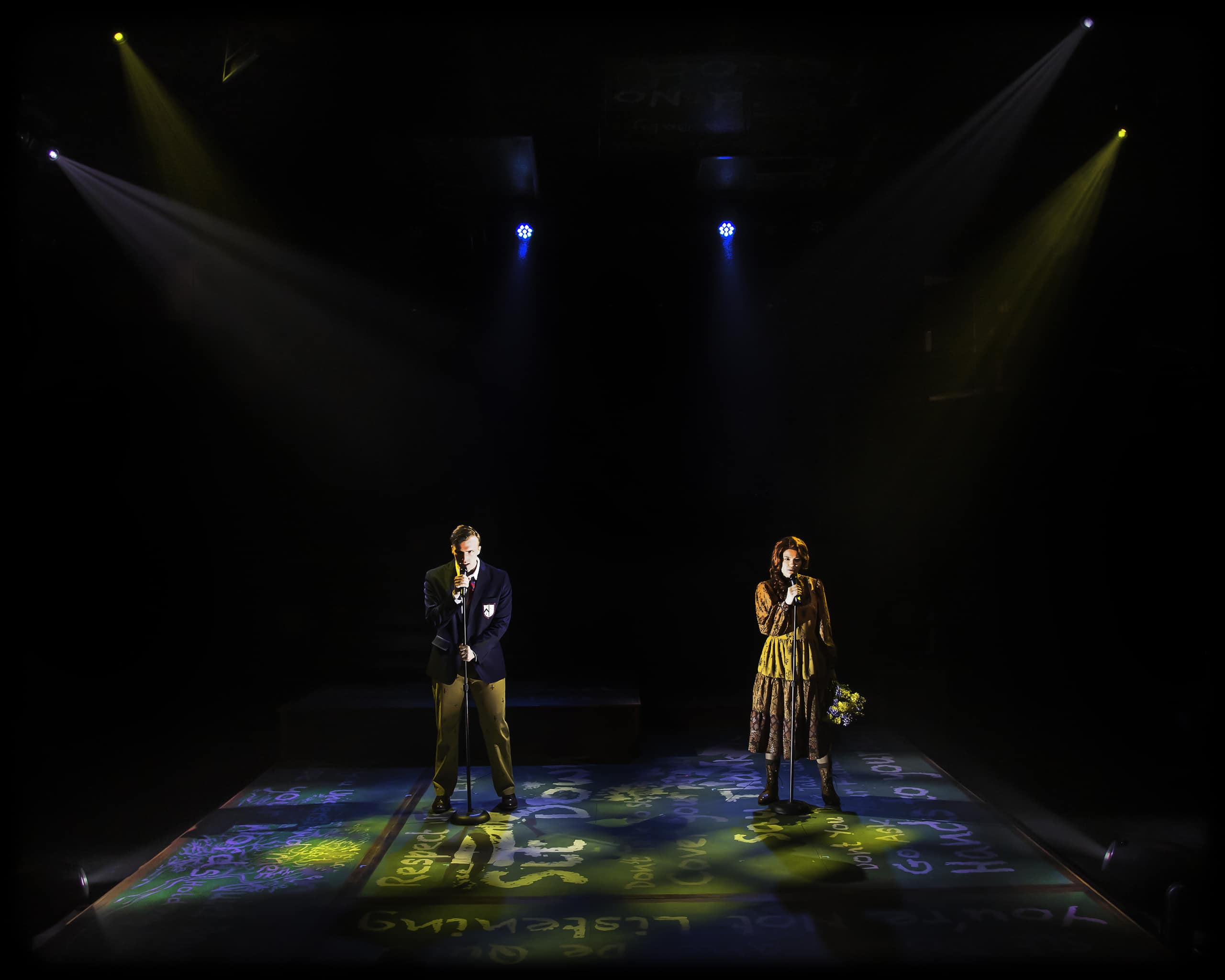 Where this play really shines is with the set design, technical, and costuming teams. The design of the theater is such that some audience members sit only feet from a technician, but wouldn’t know it due to the team’s utmost professionalism. They execute their jobs efficiently and in perfect unison. And the design team finds new ways to tell an old story. The set explores space in funky ways thanks to Scenic Designer, Joe C. Klug. Chairs hang from ceilings and the floors become a place to take notes. Tori Mays, Lighting Designer, rounds out a visually creative production with unlikely textural choices, employing geometric gobos and infusing many scenes with disconcerting chartreuse. Costume Designer, Ryan B. Moore, goes for symbolic touches by stitching tiny crosses of Peter onto the boys’ uniforms. This cross is a common symbol in counter-culture scenes, serving as a sneaky reference to the defiant nature of the students.

Another great component of this production was the live musical accompaniment – a classy touch that fosters a multisensory opportunity to connect with the play’s ethos. In many other productions they’d be hidden in a pit, but in this production they are instead proudly displayed for the audience as an essential organ, pumping their feet in tune, plucking their fingers in a rhythmic heartbeat that circulates vital energy throughout.
The script is predictable, but the execution of the production is done with gusto and skill. It’s clear those working on Spring Awakening are truly invested in this piece. This season’s final show at Arizona Repertory Theatre may not have awakened all of the senses, but it energizes one into the next phase, however screwy that may be.

Spring Awakening is directed by Hank Stratton and shows at Arizona Repertory Theatre from 4/7 through 4/28. Tickets can be purchased at https://theatre.arizona.edu/shows/spring-awakening/.