Editor’s Note: This is the tenth in a series of interviews with creative decision makers and artistic directors at all of Tucson’s theatres as we look forward to the 2019-2020 season.

Building empathy and expanding what tribe means to us, one show at a time, with Bryan Falcón.

What makes a Scoundrel & Scamp show? Well, according to Artistic and Co-managing Director Bryan Falcón: “At the heart there’s really the question of does the show have a mixture of heart and mind? Does it have a sense of mystery to it? Is there a little touch of whimsy? And is there duende that’s living underneath the surface?”

For those of you like myself who are unfamiliar with duende, it’s a figure from Latin American fairy tales: a mischievous spirit that lives in the walls of homes. While the term might be new to some of us, those familiar with the shows that The Scoundrel & Scamp Theatre produces will recognize it immediately. Not all their shows have spirits, but they do tend to have a personality of their own, an extra life beneath the surface, changing what seemed like a straightforward story into something else.

That  layered depth is alive and well in their first production, The Little Prince. A crashed aviator is confronted by a young prince exploring nearby worlds, and, with the innocence of a child, questions and ridicules the strange habits and priorities of adults. The Scoundrel & Scamp version aims to ask a classic loved by generations some of the same questions. Upsetting expectations, like taking traditional gender expectations and casting roles like the Aviator as a woman, intend to ask the questions of why things have been done one way and not another and, hopefully, answer them skillfully.

Falcón gushed about all the plays this season, about the mystery and joy he hopes each of them bring audiences, but one stands apart from the group: “In Cloud Tectonics there’s a search for who we are. It is a story that is near and dear to me. It’s a beautiful love story set against the backdrop of magical realism. A man living a mundane life, separated from the passions that filled him when he was young. It is his journey to look for the things that made him who he is and doing so through remembering Spanish and remembering the foods of his youth. These are things that speak to me as a Latin artist growing up in the United States.”

He continued, “I think border issues are on my mind a lot these days and the weight of our tendency to ‘other’ people. A lot of othering comes from a struggle to find our own people. We are hungry for an identity, something that we can believe in, that we feel is good and upright. And it’s so important for Tucsonans to be in tune with. How do we go through that process of finding what’s important to us, what gives us passion, what gives us reason to live? Cloud Tectonics is a really good story for our community today.”

Much of what he spoke about wasn’t about the content of the plays, but the issues he hopes they bring to light — namely, the issues of hate, intolerance, and a lack of basic empathy for others — and the conversations he hopes they will spark in audiences. Beyond border issues, the political climate of 2019 is on Falcón’s mind and that concern makes itself known in the productions to which he is drawn.

“I think that’s interesting, tracking how our society has changed in the course of the last three years. And there’s a lot of argument to say it has changed recently, right? But in other ways, at a basic level, we haven’t changed a lot. It feels like we are inclined as a society to draw boxes around identities and say this is our tribe and we are going to just cheer for our tribe and just tear down the other tribe as much as we possibly can. And I feel that now it’s just as important, if not even more acute, that we set up situations where that conversation can happen across the table in the lobby of a theatre or in a talkback session where you can start to feel, to step into the identities of other people, start to understand what it is that hurts them, what is it that fires them up and makes them passionate. And start to have empathy so we can real conversations instead of pointing fingers at each other and labeling them bad people.”

Empathy is key, not just in this conversation, but in the mission statement of the theatre. Falcón stressed that showing a variety of voices and viewpoints was the foundation of each season. It can be challenging, he admitted, as the history of play-writing does not always lend itself to telling stories outside of a certain sphere. But that is where he and the Scoundrel & Scamp creative team, which includes Elizabeth Falcón and Claire Mannle, come in. He explained that he might find a season he is excited and passionate about, but then realize it all comes from one perspective. And when that happens, he says, “We scrap it and begin again. It takes a lot of time and effort but it is so important to our identity as a theatre company to have that sense of diversity and multiple lenses for those coming to see a play.” 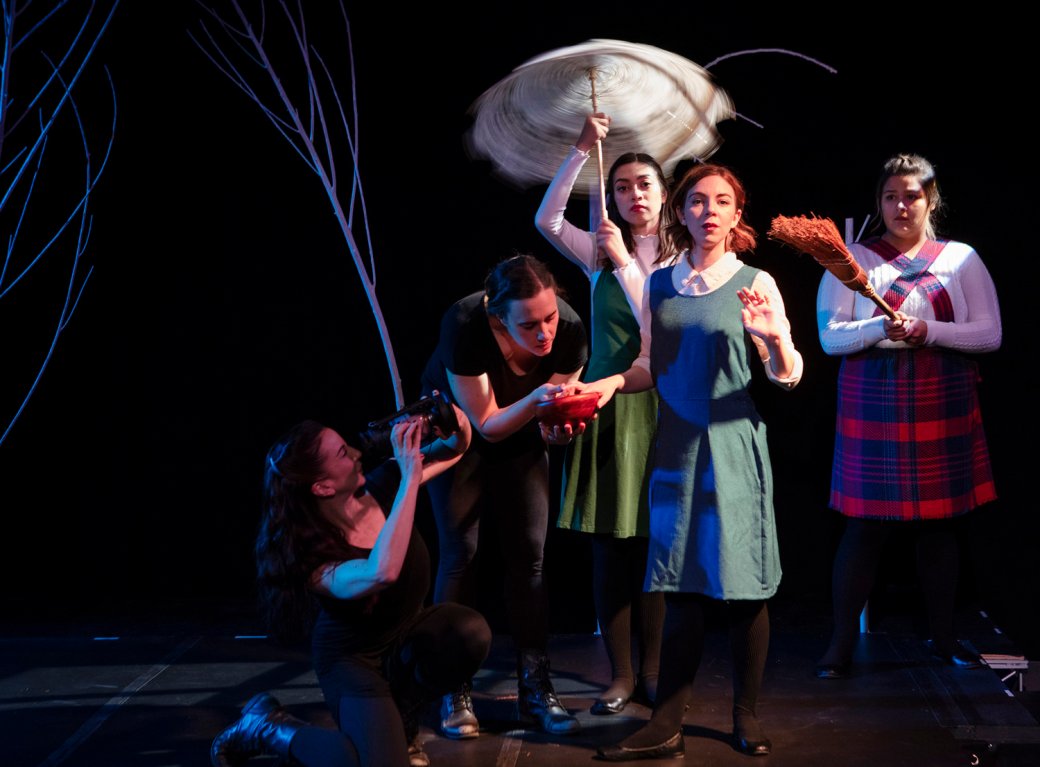 The cast of the 2018-2019 season production of This Girl Laughs, This Girl Cries, This Girl Does Nothing. Photo by Tim Fuller, courtesy of The Scoundrel & Scamp Theatre.

Falcon seems to see his role as artistic director as a humanistic duty or community obligation. “We’re really in the business of growing empathy for others through addressing concerns of the heart. We want to explore themes of race and tribe and gender and push the boundaries of what all things mean to us. And the theatre is one of the few art forms if not the artform that allows you to step into other people’s skin for a time and in doing so learn empathy. Theatre is a way to change hearts. I borrowed that, that isn’t my quote, but I heard it and it stuck with me.”

Their season contains both plays “for Scoundrels” (usually recommended for those in high school and up) and “for Scamps” (theatre to be enjoyed by audiences of any age), The Scoundrel & Scamp Theatre is working to bring theatrical inclusivity to as many people as possible, regardless of age or background. “Part of our mission is to introduce the next generation to theatre,” Falcón explained. “Part of that is by providing theatre that families can come to with some sense of security that is is going to be a good experience for all involved, work that will hook people no matter their age. And there are some things we want to talk about of a darker or more adult nature and that is our season for Scoundrels.”

You can learn more about the whole season below or on their website. Individual tickets are available before the run of each show begins but season tickets are on sale now. This season they are also introducing a new way to consume (and I really think that is the best descriptor) theatre: The Scoundrel Society. As a member, you can watch any show as many times as you like. Entrance to other events like the new Late Night with Scoundrels cabaret and more intimate conversations with creatives and invitations to parties are also promised. Plus, you get a cool mug.

The Little Prince, adapted by Holly Griffith from the novel by Antoine de Saint-Exupéry, directed by Holly Griffith
October 17 – November 3, 2019
“It is only with the heart that one can see rightly; what is essential is invisible to the eye.”An aviator crashes his plane into the Sahara desert and encounters a mysterious little prince from a distant planet. The two strangers, each far from home, share adventures and become friends. A new ensemble-based, physical theatre adaptation of the beloved classic story for children and grown ups who can remember that they were children once.

Cloud Tectonics, by José Rivera, directed by Bryan Rafael Falcón
November 21 – December 8, 2019
“What better way to understand a mystery than to fall in love with it?”
On a rainy night in Los Angeles, a man picks up a pregnant hitchhiker to help her find her way home and time suddenly stops. Realism and magical realism collide in Rivera’s dreamlike world where two souls unexpectedly cross paths.

The Light Princess, book by Lila Rose Kaplan, music by Mike Pettry, directed by Michelle Milne
February 6 – 23, 2020
“A princess needs to find her ground so goodness can prevail, everyone needs something they can call their fairy tale.”
In this musical adapted from George MacDonald’s fairy tale, a king and queen are desperate to have a child. They turn to a witch for a solution, but “there is always a price.” Their daughter is born without gravity and must find it before her 16th birthday or else… Wise men, witches, princes all attempt to come to the rescue. This enchanting musical comedy is a Valentine for the whole family, appropriate for Scoundrels and Scamps alike.

Ada and The Engine, by Lauren Gunderson, directed by Bryan Rafael Falcón
March 26 – April 12, 2020
Ada Byron Lovelace is the woman you didn’t know to thank for our digital age. Although her dear friend Charles Babbage conceived the first “analytical engine” or proto-computer, she wrote and published the first program for it, an algorithm designed to be carried out by a machine. As she comes of age with a stern mother and in the shadow of a scandalous father, we see her brilliance in conflict with 19th century conventions. Genius knows no gender.

Letter’s End, by Wolfe Bowart
May 15 – 31, 2020
Wolfe Bowart (Cloud Soup, U.S. Premiere) triumphantly returns to the S&S stage with his unique solo physical comedy. On his inspiration for Letter’s End, Bowart says “I’ve always been interested in memory – how at times it tumbles out like Fibber McGee’s closet and other times seems elusive, stuffed away in an old package in the attic. The story begins with a man inhabiting a slightly off-kilter dead letter office, but then becomes something altogether unexpected. Ultimately a wondrous and poignant journey down a most magical memory lane, where mops sneeze and storks swoop in bearing gifts and trees grow out of shoes, Bowart’s performance inspired Canberra critic Wendy Brazil to remark “you will be mesmerized … he will make you laugh, he will make you sigh, and and you will be enchanted by his every move.”

The second Friday of the month at 10:30pm
A Late Night cabaret experience – sixty minutes of the best variety that Tucson has to offer! Explore the many skills and talents the artists of our community possess in this unique experience to 4th Avenue and the Tucson Community. Acting! Song! Dance! Standup! The Physical. The Metaphysical! …and Puppetry! Now something completely different for your Friday night. The first Late Night with Scoundrels will be held on September 13th.

Editor’s Note: Leigh Moyer is the resident house manager at The Scoundrel & Scamp Theatre. While she had no input or involvement in the creative process behind building a season, we feel it is important to disclose any potential biases.