Nothing delights me more than to see a play with a wonderfully surprising plot twist. Two plot twists and I’m clutching my pearls. More than that, as was the case with Accomplice playing now at Live Theater Workshop, and I’m leaning forward on the edge of my seat, greedily along for the glorious ride.

Accomplice, written by Rupert Holmes, is a whodunnit shell game that switches intended victims and motivated murderers at every turn.  Just when you think you know who is doing what to whom, the tables turn and a new scenario and context are introduced. The story begins in a cabin in the moors of England at the cabin of the affluent Derek and Janet Taylor. With the scent of adultery and murder seeping through the witty dialogue,  we will soon learn that all is never as it seems in this unexpected cat and mouse play of misdirection and underhandedness. Who is the predator and who is the prey…and who is the REAL title character of Accomplice? 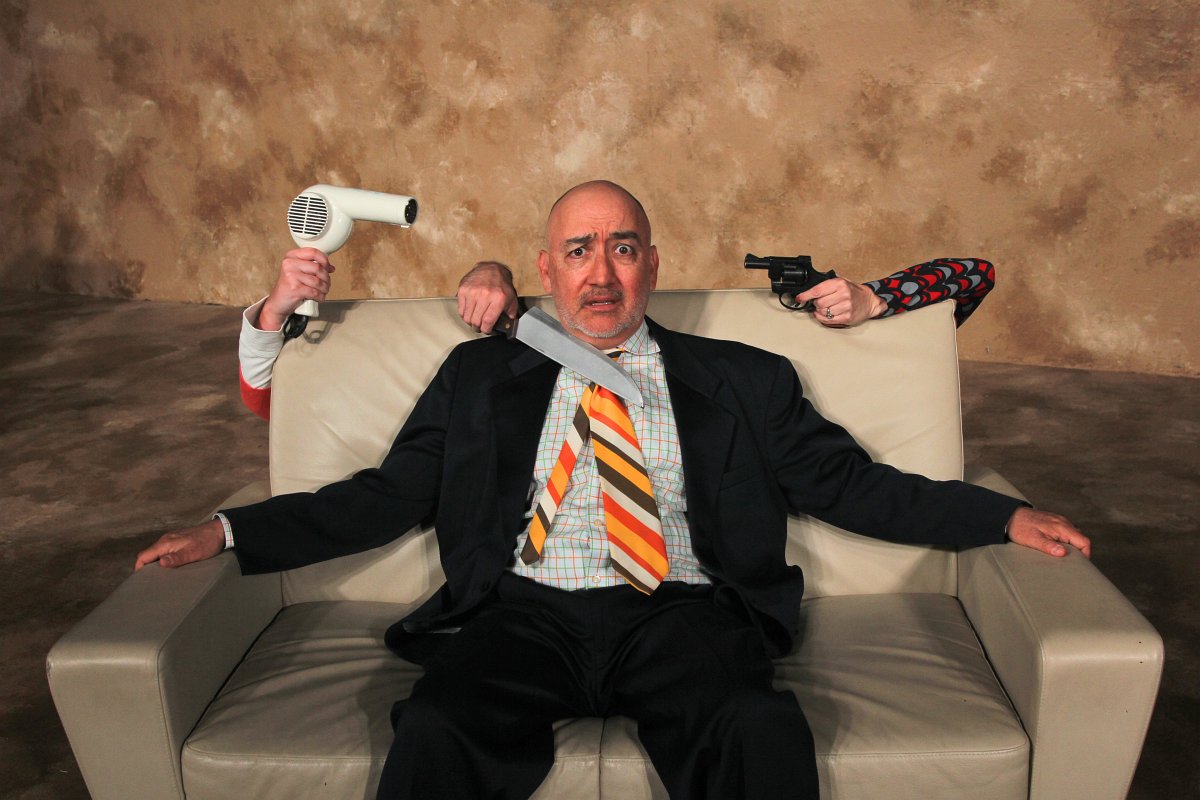 The cast handles the switches in context, character, and intention with deftness and incredible timing. While there are moments of darkness, the humor shines through in both delivery and physicality in each of the actors of this four-person mystery.

It’s difficult to write this review, because many of the things I want to say about the incredible cast would give away so many of the twists and turns the play takes. I could go on and on about each of the actors ability to use their faces, voices and bodies to take us from drawing room farce to…well…I can’t tell you. But when you get there, you won’t be disappointed.

But, what I CAN say is that Emily Gates (Melinda) is effervescent and a joy to watch, Stephen Frankenfield’s (Derek) quick-talking and physical comedy is on point, Jodi Ajanovic (Janet) is breathtaking in her ability to tell a story with a simple facial expression, and Keith Wick is so perfectly exactly who he needs to be at every turn of the plot.

The set is beautiful, the lights (designed by Richard Gremel),  sound (designed by Brian McElroy) and the direction, by Rhonda Hallquist, is spot on. Because the story is constantly shifting, Hallquist had quite a challenge in finding a way to keep the audience interested and engaged as they fell deeper and deeper into the pit of this story. The physical choices made by the actors spoke to an experienced hand at the wheel. Essentially handed 4 incredibly mixed-up Rubik’s Cubes in story form, Hallquist presents the solved puzzles perfectly on a silver platter by the end of the play.

Though it starts farcical, as the lights black out on act one, we have no idea that we will end with a twist that is so spot-on with what’s happening today. Without giving anything away, even the more cliched parts of the journey are punctuated with fantastic indictments of the male-dominated business world, and misogynistic views of women’s roles in and out of the bedroom.

Go see this play. Take a friend. Go out for coffee afterwards, and unravel everything you loved about the experience of this play. Because you absolutely will love it. And then please, for love of all things theater and goodness, call me so I can join you and say all of the things I’ve been dying to tell you!

Accomplice is playing at Live Theater Workshop through November 16th. You can purchase tickets via their website at livetheaterworkshop.org, or make a reservation by calling 520-327-4242.