A bed, bathed in violet blacklight, hovers. It serves as a token to magical realism. This type of storytelling doesn’t do the work for you. Instead, it allows you to engage with the magic and the real for yourself. For those not familiar with the term, magical realism is an artistic genre in which fantastic elements appear in an otherwise hyper-realistic setting. Though authors and artists worldwide incorporate it in their work, it is strongly associated with Latin American literature and art. High-profile examples include Julie Taymor’s film Frida and Gabriel García Márquez’s novel One Hundred Years of Solitude. Cloud Tectonics, written by José Rivera and here directed by Bryan Rafael Falcón, features a rare-for-Tucson glimpse into this type of surreality. 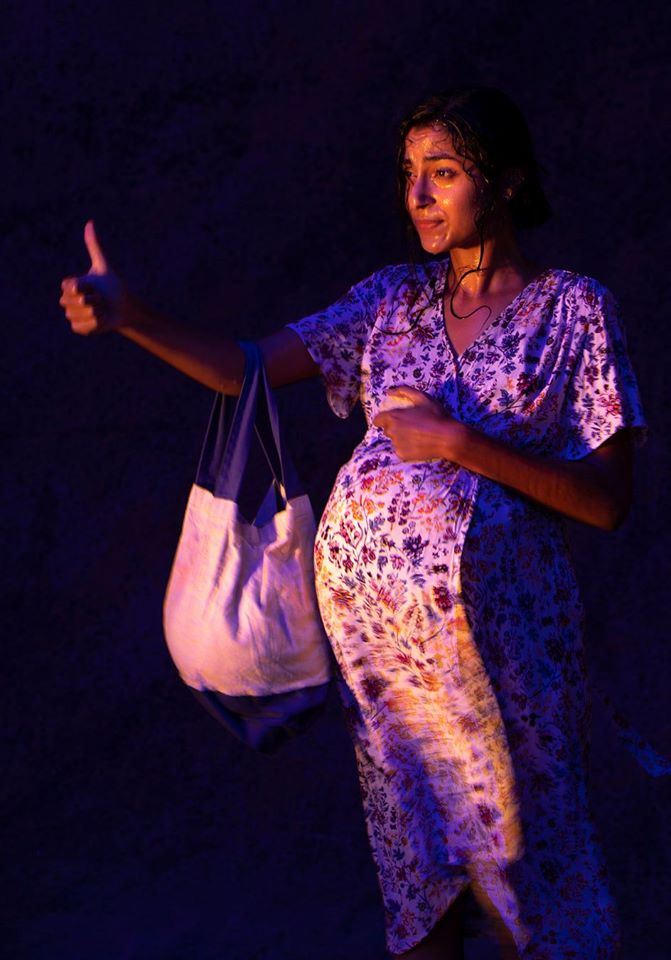 From the moment the female protagonist Celestina del Sol, played by Azúl Galindo, appears, we feel the uncommon nature of this play.  We meet her in the bizarre madness of a Los Angeles typhoon. She, a wandering woman with a pretty obvious predicament, lucks out with a ride from the benevolent but emotionally wounded Aníbal, played by Marc Pinate.  What develops is a swirling layer cake of happenings.

If you want simplicity, this isn’t your show. Don’t expect answers — you may leave confused. But isn’t that fun? Well, I enjoy that kind of story.

See, without linear explanations in the way, the eccentric stray thoughts of people have more space to solidify blurred edges of this tale.  The performance has an overall disorienting feeling due in part to the innate quirks of these characters. But more so, Galindo’s cadence is markedly off-beat and this lends to a strange affect. Her chemistry with Pinate’s character is odd yet, one has to ask, is this by design? Is this a byproduct of the phenomena of forced intimacy in surreal romantic plots or could it be related to our basic perception of time, how it folds upon itself, how it shape-shifts in our memory? Does the macho superego of Aníbel’s brother Nelson, played by Cole Potwardowski, have to be so antagonistic; does all of the affection have to be so extreme in order for us to get the playwright’s intent? And most pressing, who/what is Celestina? Well, you choose.

Between long spaces of silence are welcomed interjections of TV static and radio noise.  Touches of absurdity in minor key tones and tinny vignettes projected into vintage microphones help us realize that time has become irrelevant. As one watches this performance they may ponder their geography as an audience member, where the characters have gone, and whether it even matters.

The silent, rhythmic set assemblages add a subtle homage to magic. Between scenes, amongst muted blue light, two technicians move in unison like otherworldly helpers. They float throughout the set, rearranging elements in order to bring new life to the stage. In one particularly moving moment they methodically disassemble the house — and one cannot help but extend the metaphor further: the dissolution of a home – the breaking of a heart -the haunting in one’s head. Their eerie presence accompanied by the sustained raindrops and shaking thunder claps gives the illusion of a controlled chaos; that it is indeed, much crazier “out there”.

There are some links to grander, worldwide issues and if one is willing, they may sense a commentary on sanity, the well-being of young women, and how a culture’s relationship to time has major implications on its people. But trying to keep up with the who, what, and when of this production is complicated. The unique and pleasing challenge of Cloud Tectonics is allowing oneself to embrace the ambiguity of it all. As Celestina says, “Time and I don’t hang out together.”

Cloud Tectonics runs from November 21st through December 8th at the Scoundrel & Scamp Theater, located at 738 N. 5th Avenue. Tickets can be purchased by calling (520) 448-3300 or visiting https://scoundrelandscamp.org.