I am going to start off this review by being brutally honest with you, readers. I loathe the novel and walked into the theater highly skeptical. I wondered if I would find myself fighting to stay awake. I was quickly proved very, very, very wrong. The Rogue Theatre’s adaptation of Herman Melville’s classic novel Moby Dick is artistic collaboration at its finest. Cynthia Meier and Holly Griffith adapted the novel and what a dream team they are. This dream duo adapted a tough story in a way that draws you in as an audience member and keeps you wondering what might happen next. I was also pleasantly surprised by the appearance and addition of the Three Fates. This added an extra level of magical mystery. 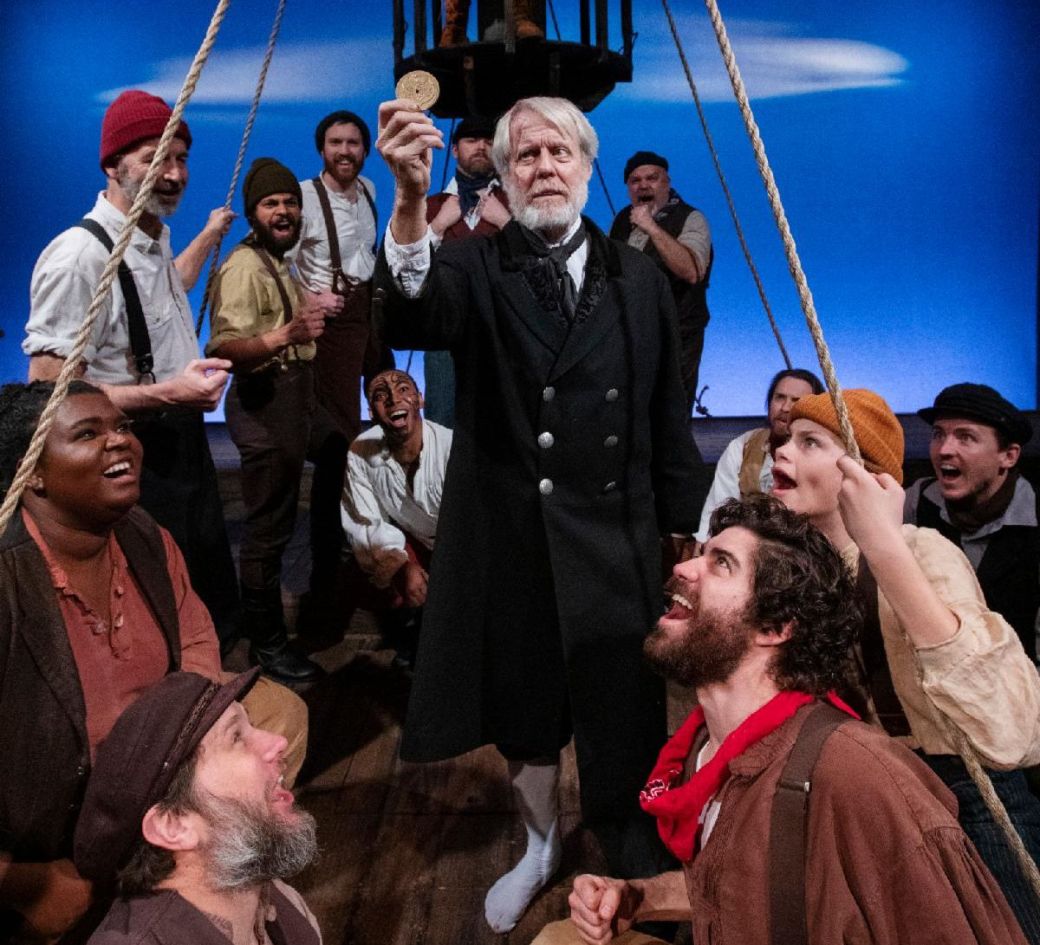 The cast of Moby Dick. Photo by Tim Fuller, courtesy of The Rogue Theatre.

The production showcases several types of artistic collaboration from music direction by Russell Ronnebaum, movement coaching from Patty Gallagher, Don Fox’s lighting design and Joe McGrath’s set design. I was very impressed by one specific scene that had choreography by Ballet Tucson’s Daniel Precup. Precup’s knowledge of traditional character dances was highlighted in this dance and added a wonderful energy and beauty to the show.

The performances were moving and beautifully done. Aaron Shand was the perfect Ishmael. He gave Ishamel a relatable and human aspect that was greatly appreciated. I hope to see more of Shand in other Rogue productions. Joe McGrath as the crazed and obsessed Captain Ahab was eloquent and heartbreaking at times. Ryan Parker Knox as Starbuck was impressive. Starbuck’s journey as a character was one of my favorites in this adaptation and this performance shows how talented and well rounded Knox is.

Some breakout and new performances were also in this production. Eduardo Rodriguez as Tashtego was captivating and well balanced. Owen Saunders as The Boy was charming. Saunders is a young actor to look out for and I am looking forward to see more from him in the future. There were two performances in particular that were graceful, moving, charming and a wonderful addition to this already brilliant ensemble of actors. Gianbari Deebom as Daggoo is casting at its finest. Deebom embodied her character and made everyone in the room forget that she is a woman playing a male character. I applaud this performance and I hope I see casting like this in the Tucson community more often. Jeffrey Baden as Queequeg was intense but still very human and my favorite overall performance in this production. You could tell that Baden did his research. I was very impressed with some of his mannerisms and physical qualities. For example, before Queequeg and the men go off to fight the great white whale for the first time Baden beat his chest and stuck out his tongue just like the Maori do in the traditional dance of the Haka, which is performed before battles and special occasions. These little movements made Baden’s Queequeg even more real for me as an audience member.

The Rogue’s adaptation of Moby Dick is one you shouldn’t miss. This is probably my favorite Rogue performance that I have seen in a very long time. Sometimes I find Rogue productions repetitive or overdone, and I hope that trend for the theater is over.  Moby Dick had me asking questions about destiny and fate. It had me wondering what would have happened if Ahab made different decisions and I believe that is what theater about. I was also elated to finally see women adapting and directing a play that deals with the topic of one man’s obsession and his ego. This was beautifully done and gave me as an audience member a new perspective on a story I was not too fond of.

You can catch the beautiful performance and purchase tickets at The Rouge Theater online at theroguetheatre.org or by calling (520) 551-2053 through January 26th, 2020.