Time Stands Still by Donald Margulies is a glimpse into the lives of people whose careers are dedicated to sharing the violence in the Middle East with the rest of the world. Sarah (Carley Elizabeth Preston), a photojournalist, arrives home after being injured by a car bomb. She comes home to her partner, James (Christopher Younggren), a reporter who had already returned from the war zone, her editor Richard (Glen Coffman), and his new, young girlfriend, Mandy (Emily Gates). 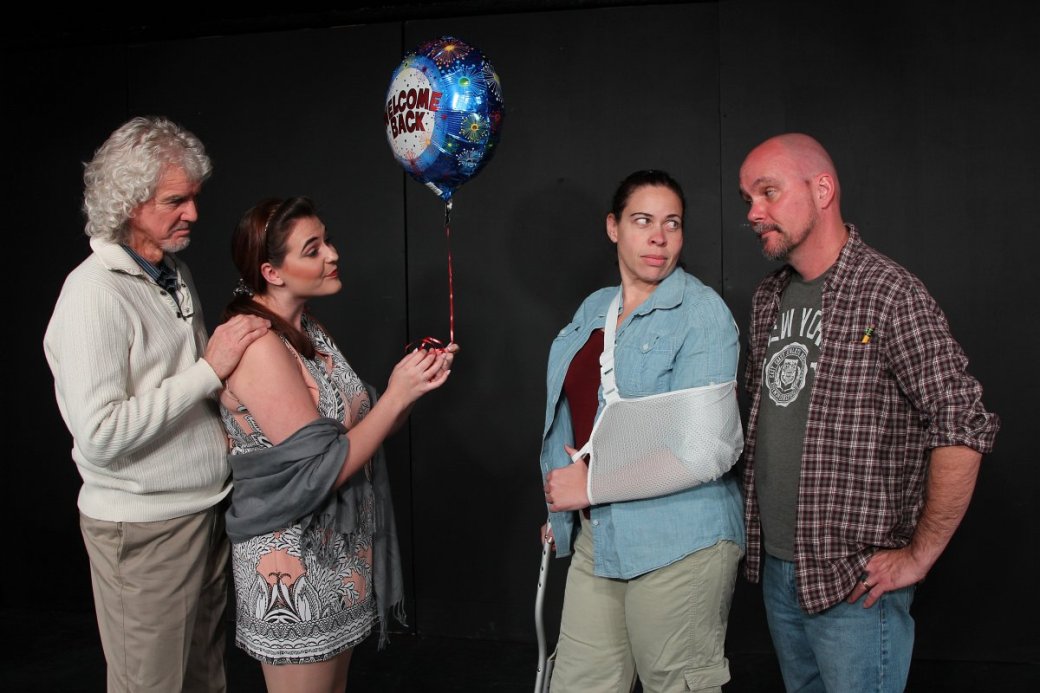 Director Eva Tessler sculpted Live Theatre Workshop’s production of this script with passion and honesty in such a way that I was left contemplating much of it in larger, more worldy perspectives. During a heated conversation about the horrors that surround the photos she captures, Sarah states, “cameras are for catching life on film, not changing it.” The strict clarity Preston delivers this line struck me with the consideration that plays are very similar in that capacity, offering a moment in time to viewers without any real capacity to “change life” in that moment. Yet both photographs and live performances, along with many other art forms, evoke change within the viewer, even if just for a moment. Sometimes that change leads to action, sometimes it’s just a moment of feeling.

There were a number of other moments and themes that had me in a contemplative spiral of micro vs. macro, the experiences the production explored in the moment vs. the same experiences occurring throughout the world, but with the weight of reality rather than the comfort and safety of “art.” In fact, each character had a unique relationship with the concept of comfort that were all very rich and left me with the additional consideration of how fortunate we are to be able to choose to experience war. In the United States we aren’t born into war zones, despite how social media makes it feel at times. In the theatre we are even more privileged, whether as an artist or audience member, to evoke and experience our compassion through art instead of first-hand.

Tessler and her cast of four seamlessly incorporated these themes into the performances, offering the audience a savory theatrical experience.  Sarah’s humanity, shrouded in stubbornness, is grounded by Carley Elizabeth Preston’s natural ability to shift between sarcasm and sincerity with ease. Her adjustment from the life-threatening environment of Iraq to the comfort of her home in the US is a struggle, at times quite subtle, and Preston handles it with sophistication. Mandy, portrayed with a genuine innocence by Emily Gates, is a pleasantly surprising character. An Event Planner, she is presented in a way that suggests she shouldn’t be taken too seriously, at least at first. Even her initial costume is an amusing hodgepodge of colors and styles. However, Gates gives Mandy strength in her naivete that supports her moments of pure profundity. 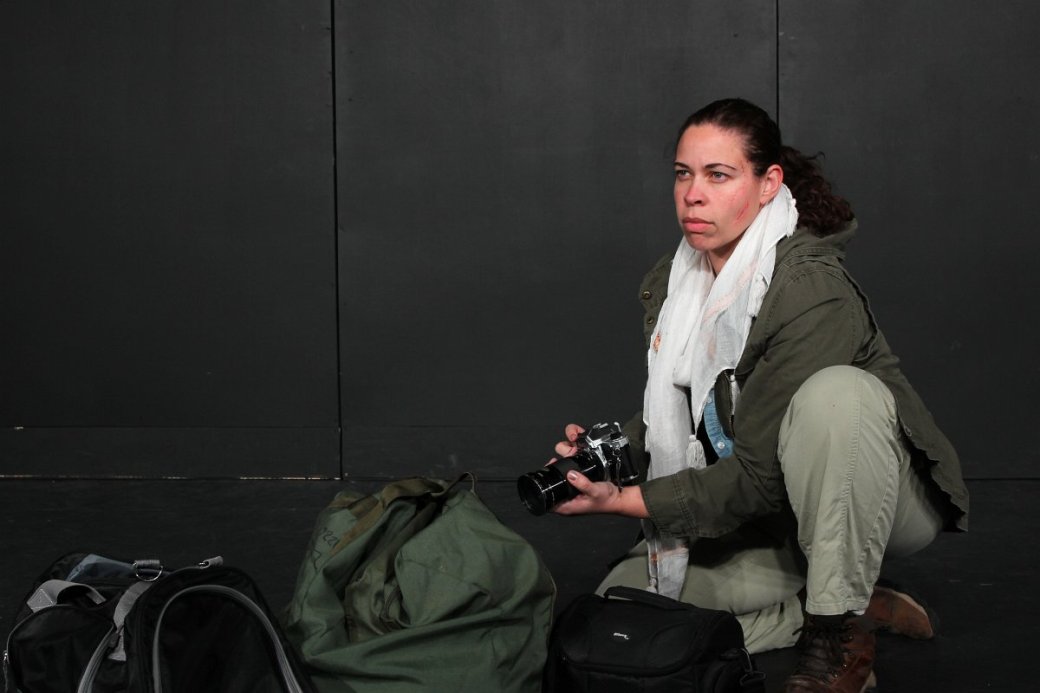 Mandy serves as both a foil and a mirror to Sarah, highlighting another thematic question I left pondering, gender roles. Mandy is the epitome of “female” and fully embraces her desire to take on that role. Sarah, on the other hand, with her need for independence and yearning for life-threatening adventure, exhibits traits that we often attribute to men. Interestingly, both men in the production, Younggren as James and Coffman as Richard, amplify what might be considered by many to be “classically feminine” qualities as both men are lead by their desires for love and family. There are several early references to Richard’s proclivities for brief relationships, allowing him the opportunity to find comfort in settling down with someone and truly committing to Mandy. James flips his previous adventure-seeking self around to fight for a chance to experience the normalcy of marriage and family. Both Younggren and Coffman embrace these characteristics with gentleness and grace. This shift in gender conformity made me realize that the male characters highlight the fortitude of the women, each on their respective paths. Thankfully, and effectively, every single performer allows us to experience their individual spectrums of conformity or nonconformity, and that doesn’t limit itself just to gender roles. 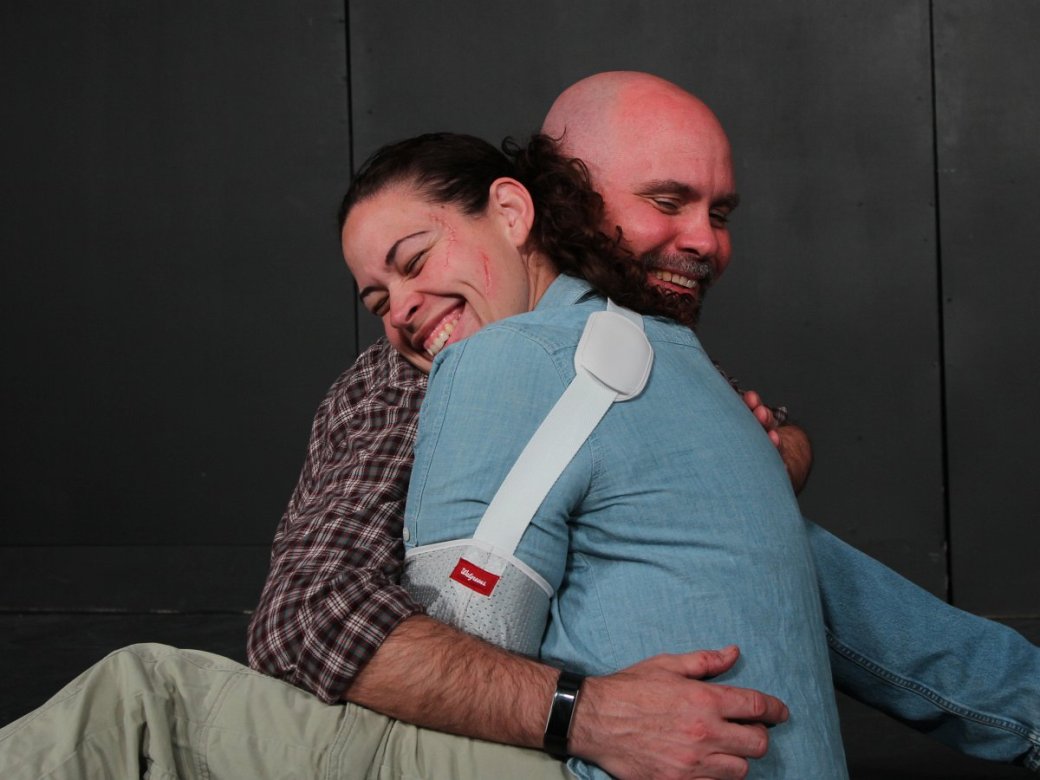 The technical elements of the production were both simple and complex. There is only one set on the stage, an uncomplicated studio apartment with its distinct bedroom and kitchen/living areas designed by Jason Jamerson. The complexity is in the details, the style of the window that reminds us they live in NYC, the photos and small relics of the inhabitants’ travels. Interestingly, the evening I attended there were a few audience members that chose to take the stage and explore the photographs that decorate the bedroom, either prior to the start of the show or at intermission. After reading that the production consulted Michael Kambar, an actual photojournalist that had worked in Iraq, I wondered if those photos were authentic and wished I had been so bold to explore myself.

Another simple complexity is that, though there is only one set, the show has two settings: the present, and memory. The present is simple and straightforward, but the memories are scored with Middle Eastern music (sound design by Brian McElroy) that fades in as the lights (designed by Richard Gremel) shift to focus in on the speaker. Conceptually, this is a beautiful way to honor the text of the memory. Unfortunately, I found the execution of this transition to be a bit too abrupt, distracting me briefly from the artistry and message of the moment. I hope that the rhythm of those transitions find their finesse as the run continues because they are truly captivating moments and deserve the time it takes to ease the audience into them.

Times Stands Still evokes the essence of its title, augmenting a story that simultaneously has happened, is still happening, and will continue to happen, deeming it all fixed and motionless in “the big picture.” You can catch it through March 30, with performances at 7:30 p.m. Thursdays through Saturdays, 3 p.m. Sundays, (also 3 p.m. March 30)  at Live Theatre Workshop, 5317 E. Speedway Blvd. Tickets are $15 Thursdays, $20 all others. For details and reservations, 327-4242, or visit livetheatreworkshop.org.