The Roadrunner Theatre has an impressive lineup of plays in their season, including classic playwrights like Tennessee Williams, comic playwrights like Noel Coward, and even local playwrights like Monica Bauer. They have an ambitious season, and I was happy to see a community theatre company producing such varied work on the east side of town. Local, accessible theatre is important, and I am glad Roadrunner exists.

That being said, I was troubled by their production of Inspecting Carol by Daniel J. Sullivan. Written in 1991, Inspecting Carol is a comedy about a regional theatre company in financial turmoil and their dysfunctional attempt to produce A Christmas Carol for the millionth time. That’s all I knew before seeing the play, and I looked forward to it. I love comedy. I love metatheatre. I even love A Christmas Carol. I was excited to see the show and to explore a theatre I had not been to yet. But the script is very problematic. Not only is the comedy somewhat thin, but the politics of the script are outdated and outright offensive.
The play, directed by Robert Ulsrud, centers on Wayne Wellacre, a bright-eyed wannabe actor looking for his big break despite his complete lack of experience. Ironically, John Reimann plays Wayne very convincingly. A good actor playing a bad actor is a real treat. When he arrives to audition for A Christmas Carol, the Artistic Director Zorah Bloch, played by the capable Shari Goddard, mistakes him for an inspector from an important government agency deciding on their funding. Mishaps ensue. A decent premise. A promising conceit. But the script had so many tasteless jokes I couldn’t get past.
Perhaps most inappropriate was the storyline of Walter E. Parsons. Walter, played by Bird Moody, is the first black man ever hired by the fictional theatre company, and he was hired to play the ghosts of Christmas past, present, and future. The script is a minefield of cringe-worthy jokes about covering Walter up to make him stand out less in the sea of white actors. Zorah says several times that he was hired to fulfill a diversity quota, complaining about how the company won’t receive public funding without him. Another character, Phil Hewlit, is openly racist toward Walter, repeatedly referring to him as “my man” and harboring unjustified rage towards him.
While I think these are actual issues facing many theatre companies nationwide, and therefore worthy of exposure and discussion, the script did not present them as problems to be solved, but rather as funny quirks of an otherwise morally upright company. We were meant to chuckle at the grotesque racism of the company and move on, and the script even invites us to celebrate Phil’s racism as a fuel for his impassioned performances. 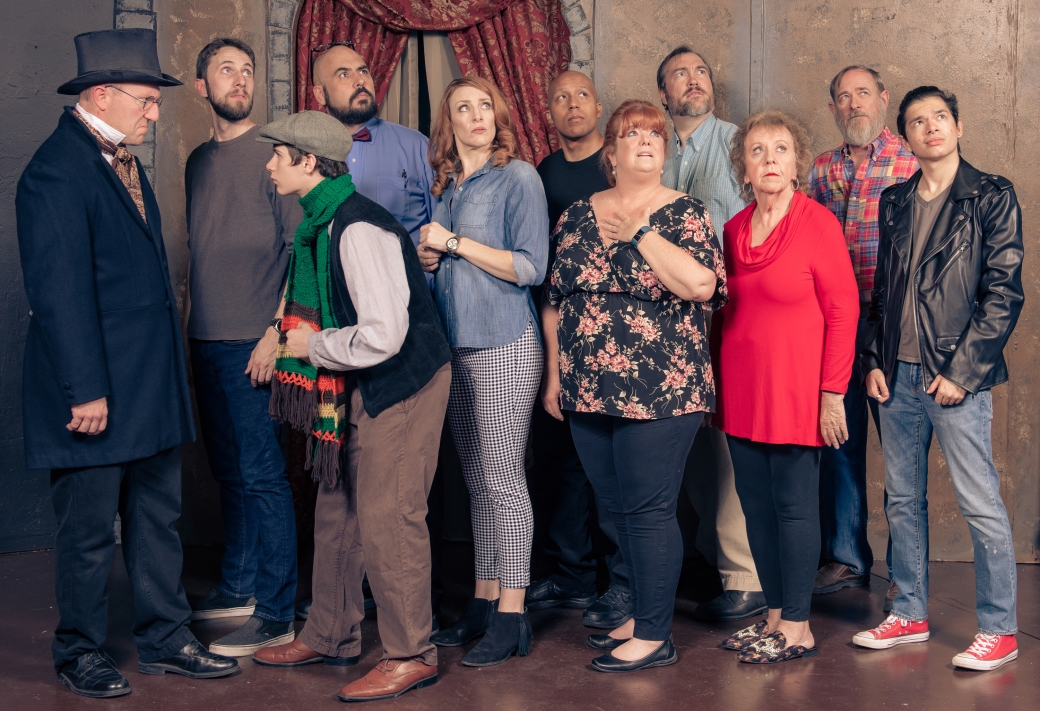 The cast of Inspecting Carol. Photo by Jeffrey Snyder, courtesy of Roadrunner Theatre.

The other problem of Walter’s storyline is that it forces Roadrunner it whitewash its cast. When you stage a play about an all-white company who hired one black man, you have to BECOME an all-white company with one black man. Had there been more black actors onstage, Walter’s storyline would not have made sense. Why not avoid plays that force racial inequality? Why not choose scripts that allow for more diversity? Or, at the very least, if a script demands a mostly white racial demographic, the story should be worth sacrificing that diversity. I’m not sure that this one was.
There are similar problems throughout the script. There are homophobic jokes and caricatures of Mexican culture. The script brushes over moments of sexual misconduct and celebrates aggressive, toxic masculine personalities. Inspecting Carol is almost 30 years old, and it shows. The politics of the world portrayed are wildly outdated and, in my opinion, no longer appropriate on the American stage.
I will give Roadrunner another chance because I believe in their mission and support their place in our community, but I want to urge their leadership to be more careful about their play selection. I would rather have seen them actually produce A Christmas Carol with diverse casting. It would have been more compelling, productive, and responsible.

Inspecting Carol runs at the Roadrunner Theatre through December 23rd at 8892 East Tanque Verde Road. Tickets may be purchased online at www.roadrunnertheatrecompany.org.