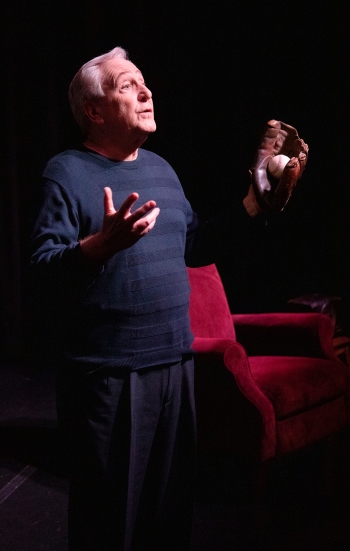 Bill Epstein in My Life In Sports. Photo by Tim Fuller, courtesy of The Scoundrel & Scamp Theatre.

Spoiler Alert: My Life in Sports, a one man show written and performed by English professor Bill Epstein and performed at Scoundrel & Scamp, is not actually about sports. Well, not entirely. I felt as though sports served more as a loom and thread. A tapestry of life experiences is woven before our very eyes. The structure of the story-telling takes on various shapes and patterns as Epstein connects memories through time, using anecdotes and metaphors that often circle back to where they started.

The simplicity of the direction and production design by Bryan Rafael Falcón and the sincerity of Epstein’s delivery of the dialogue drew me in with a comfortable warmth that felt like I was 8 years old being told a folk tale by my grandfather and hanging on every word. Now that I think of it, the play starts when Epstein is 8 years old, so perhaps that was the intention all along. I found it to be a very effective way to draw people in, although at times I did find myself drifting simply from the soothing tones of the narration. Still, I was very impressed with the production and how the concept of sports, whether literal or metaphorical, took me on a journey that touched me profoundly.

The thing I appreciated the most was Epstein’s reflections on the relationship between sports and the “construct of masculinity.” We all know that there seems to be this unspoken “romance” between men and sports. Not all men experience this of course, and not all people that experience this are men, but somehow society has created this construct of “boys play sports” that this production explores a little more deeply and with a self-awareness that is appreciated in a time where constant social examination and re-evaluation is needed. Epstein does a fantastic job capturing the essence of the time in which he was raised, amplifying the understood gender norms, racial inequality, and his privilege of being not only a white male, but also his father’s son. He discusses, at times, how sports, or sport-like behavior, was how boys established their pecking order. In his Author’s Notes he states “Virtually the only live and unrehearsed programming still on network television, the subject being discussed, endlessly, on twenty-four-hour talk-radio stations across the country, the section of the newspaper most men turn to first, sports are a powerful and influential narrative formation, one of the crucial ways that American men construct identity.”

We all saw this truth during the NFL “taking a knee” controversy, which, as you’ve noticed, has disappeared as quickly as began (maybe because it’s off-season, or maybe because those that were “offended” by it have moved on to other asinine battles… but I digress). My biggest fear is that sports is to America what the games of the Colosseum were to Rome, a tactic to distract the poor from their poverty in the hopes that they would not revolt. I don’t dislike sports, and played them for many years (before theatre took complete reign of my life), but I believe they have the power to keep the masses complacent just as they have the power to fuel the “masculinity complex.” Although he used some derogatory language on occasion, and I hate giving him the “product of his time” pass, I wasn’t terribly bothered by it because it was made clear that that was in fact the past, and not the present, and I believe and embrace the social evolution of which we are all capable. If we don’t know where we came from, we can’t possibly accurately assess where we are.

There were several other lovely elements of the production. The space is lightly littered with a baseball bat and glove, eventually a coat rack with a jacket to signify Epstein’s scholarly career choice, and even a pair of ballet shoes to represent Epstein’s late wife, but to also remind us that dance is another sport that significantly impacted his life. The use of projections offered environmental settings, magnification of text, and the creation of emotional atmospheres. The subtle sound effects enhanced those atmospheres, as did the simplicity of the lighting. Epstein includes references to Tennessee Williams in his Author’s Note, describing memory as “dimly lighted” and “poetic” and “seems to happen to music.” The design team, comprised of Bryan Rafael Falcón, Josh Hemmo (Projection design), Connor Greene (Production Design Associate), Brian Graham (Lighting Designer), and Tyler Berg (Sound Design), manage to capture that description of memory within the intimate performance area with skill and artistry.

Bill Epstein in My Life In Sports. Photo by Tim Fuller, courtesy of The Scoundrel & Scamp Theatre.

Though I could call out this production for is male-heavy team (Stage Manager Marguerite Saxon being the only female name listed) and focus on the voice of yet another white man, the content of the work gives me faith that these men understand the privileged patriarchal patterns society perpetuates. Besides, if they are engaging in the creation of theatre, they have likely broken from the “construction of masculinity” imbedded in a “life in sports.”

My Life in Sports plays at Scoundrel & Scamp Thursday through Saturday at 7:30pm and Sunday at 2pm. For tickets call 448-3300 or visit scoundrelandscamp.org.