It’s hard to explain what Pima Community College’s Center for the Arts production of Polaroid Stories, directed by Marc David Pinate, is like. It’s ancient myth and modern problems, but turned in on itself until it is both dizzyingly beautiful and powerfully painful. It’s like the euphoria of letting go with a good buzz. It’s like a heartbroken song sung beautifully but without accompaniment. It’s like too many voices talking all at once and then perfect silence. It’s like this. 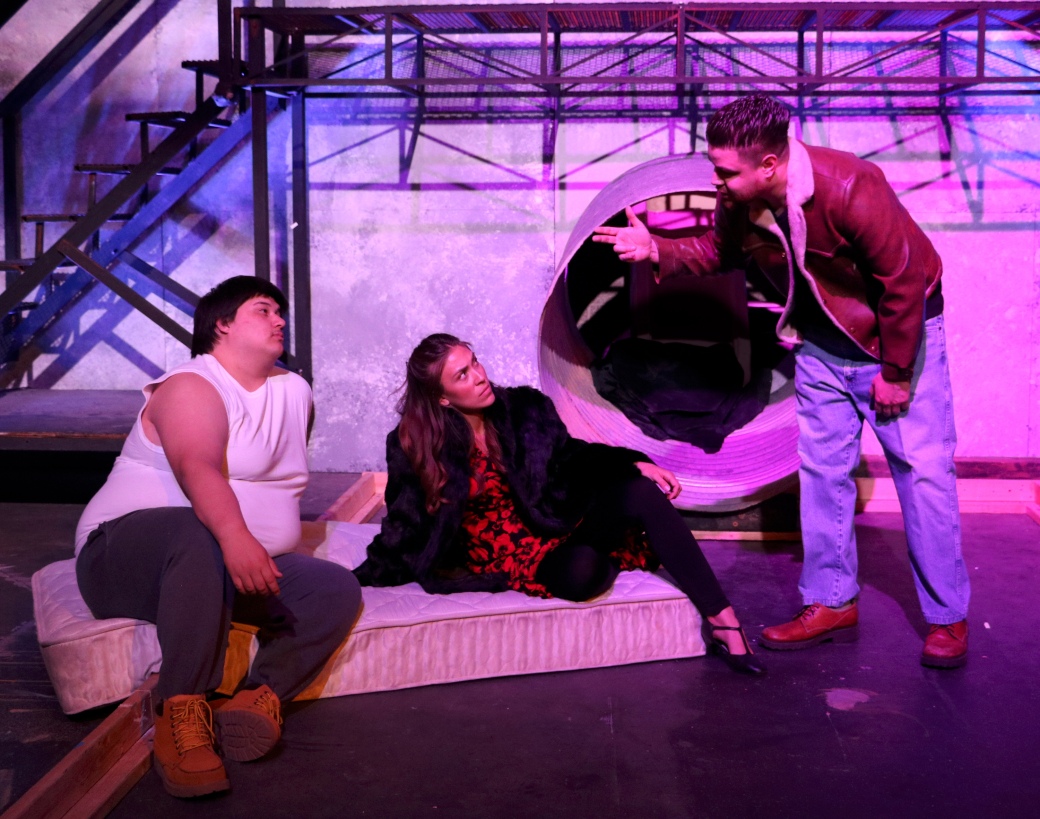 Adrian Hinojos as Dionysus, Veronica Conran as Persephone/Semele, and Rene Gallego as Orpheus. Photo courtesy of Pima Community College’s Center for the Arts.

This is a story of ten men and women living – fighting to survive – on the streets of Seattle. And while the action follows these men and women through their troubled home lives, bad beginnings, worse endings, and bad choice after bad choice, playwright Naomi Iizuka does something clever: she keeps the modern day setting, with the harsh language, the cheap beer, and the sirens in the background, while her cast of downtrodden are pulled right out of mythology. This isn’t a morality play. This isn’t the story of falling on hard times and triumphing anyway. This is classic poetry, safe and removed from us and therefore infallible on some level, but with the context twisted. We’re left in a place where we can’t say, well, if only they’d lived differently, it wouldn’t be like this.

Iizuka uses familiar Greek myths, including Hades and Persephone, Narcissus and Echo, and Orpheus and Eurydice, in place of the John and Jane Does who usually fill these roles in the news. If you aren’t familiar with the myths, you won’t miss anything; the story is still clear, but a quick Google search on your phone during intermission brings so much more depth to the play that I recommend taking a few minutes to learn the basics of these figures and their mythology.

The telling is immersive and jarring. One minute you feel the palpable pain of a character, the next you are relishing the release of a light, drug-induced moment, the next you are jerked back into your seat by the reality of a moment. The staging and direction keeps the audience looking around for the next thing, a detail Pinate likely added to both put you in the mindset of the characters always checking over their shoulder and to allow for actors to exit and enter during scenes of distraction, allowing them to almost appear out of thin air. It is very effective.

I was equally impressed with the actors’ abilities to be present on a stage with a lot of activity without losing a beat, their character, or the thread of the modern combined with the classic. I commend the cast’s performances, each playing two roles: the myth and the contemporary representation.

Taylor Hernandez as Eurydice gives us a battered woman, too young to have dealt with her trauma, running from a lover that won’t let her go. She is haunting as she swings from brave and freed to petty and foul mouthed. I felt for her. I wanted to take her in, protect her, but simultaneously knew she’d never accept it. Shalin Allen as Narcissus, trapped in poverty, but dreaming of better and doing whatever he has to to get it, is almost annoying, in the right way, in his obsession with telling, retelling, and embellishing his life story. Veronica Conran as Persephone/Semele was very much a broken woman; costumed to suggest she is a prostitute, she played the woman blamed for ruining the life of men, the woman who can’t win. The slight twanged accent and effortless charm of Brandon Saxon’s Hades/Zeus, who is easy to feel sorry for among the crowd of addicts for craving only love and a good night’s sleep, paints Persephone/Semele, and in fact all the characters and their flaws, in sharp relief.

I was particularly moved by Izzy Georgiaes as Philomel, who communicated intense longing and terrible loss entirely though song and silence. And, with the most myth spoken word for word, but slurred and jumbled up with f-bombs, Adrian Hinojos as Dionysus and Rene Gallego as Orpheus blew me away as they retold myths in such a way that they were were completely recognizable as poetry and equally as the ridiculous ramblings of drunk or high men stumbling after dreams they can’t remember. Sauri’ Rae Nez as Echo, even once freed from repeating the second half of her stage partner’s lines, still couldn’t find the words. Echo’s frustration is conveyed through exasperated motions and begging hands and eyes, even with so little actually said, was achingly familiar to anyone who has found themselves unable to find the right words.

Tossed in amongst the Greek tragedies are two very modern characters, named simply Skinhead Boy and Skinhead Girl. Played by Evan Taylor and Vauxn Mcquillen respectively, these two had perhaps the hardest parts to play. They had no poetry to fall back on. They were raw. They could be difficult to watch. They forced the audience, me, to remember this isn’t an edgy retelling of old stories. These types of events are unfolding with young people just like them in every city. They each have moments that pull them out of the fairytale the others live in, such as when Skinhead Boy swears he is going straight edge, a look in his face doubting it even as he says it, or when Skinhead Girl, scared of the dark, reminds herself, “Ain’t no monsters, nor for real, except the ones in your head.” 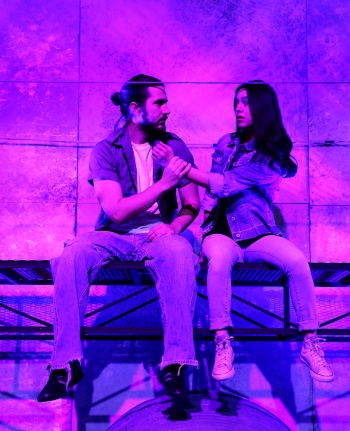 The eleventh character is the stage itself. It is stunning. With audience seated on two sides along a long waterway, massive drain pipe, and bridge utilized to connect and distance characters, the scenic design, by Todd Poelstra and Anthony Richards, does a lot of work to tell the story. Additionally, the light (Cammy Silcox and Etienne Wegryzniak), sound (Adrianna Kendrick and Mary Tran), and video design (Kyle Odell) move the story from the real to the surreal. Though the dialogue is powerful, without the staging, it would have felt flat. And with such a set, mad props to the crew (Gianbari Deebom, Stacey Posey, Fiona Germann, Brianna Tapia, and Mary Tran) for taking on such a beast of a production.

I was impressed with this production. There were some slips or slow cues, as well as a handful of moments I felt were just a little too over the top that could have been reined in a little, but altogether I was blown away. It is the kind of theatre you watch to think and feel, not just spend an evening being entertained, although I was that as well.

Don’t go for a happily ever after. Polaroid Stories won’t give you one. Instead go because the stories need to be heard as badly as they need to be told. Give the storytellers, ten young men and women trapped in poverty, homelessness, addiction, and violence, the audience they deserve.

Polaroid Stories plays at Pima Community College’s Center for the Arts (West Campus) Thursday through Saturday at 7:30pm and Sunday at 2:00pm through April 28th. You can purchase tickets at pima.edu/cfa.