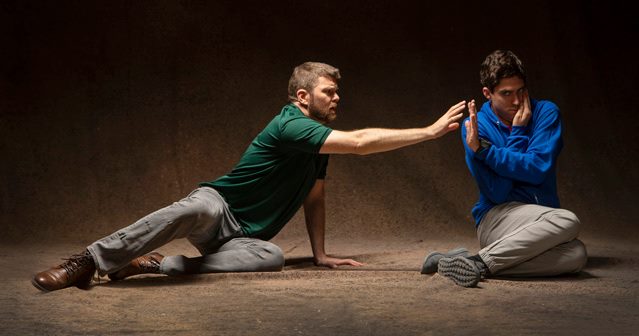 Ryan Parker Knox as Ed and Hunter Hnat as Christopher. Photo by Tim Fuller, courtesy of The Rogue Theatre.

All actors remain on stage unless prescribed otherwise. This is one of very few scripted stage directions in The Curious Incident of the Dog in the Night-Time. Cynthia Meier, the director of The Rogue’s novel-inspired production, noted that she took that one to heart. In doing so, Meier and her ensemble of 10 performers sculpt a simple and genuine theatrical experience layered with complexity. This is a production that emphasizes the powerful storytelling potential of a well-trained ensemble in lieu of elaborate spectacle.
The Curious Incident of the Dog in the Night-Time is the story of a young man, Christopher, who takes on a detective role in effort to uncover the mystery behind who killed his neighbor’s dog. As can happen when sleuthing, he discovers much more than he could have imagined.
This detective story is unique from others: Christopher is autistic. While autism expresses differently for different people, in this production it is his ability to interact with others that is most evidently affected. Put simply, Christopher’s social communication skills are not in alignment with societal standards. Told from his perspective, the audience can experience Christopher’s world as he does. The ensemble introduces this quality at the top of the show by disrupting the audience’s sense of normal. Christopher’s teacher and mentor, Sioban, played by Patty Gallagher, delivers dialogue that doesn’t seem to belong to her while the rest of the ensemble re-enacts memories and thoughts from Christopher’s mind. All this occurs while performer Hunter Hnat, who plays Christopher, masterfully embodies every word and action taking place around him, occasionally stepping into the scene of a memory, but only speaking when he’s commenting on his version of what’s happening. This disembodied introduction also establishes that this is a story Christopher wrote and is sharing with the audience.
Throughout the production, the ensemble enhances the experience of what it’s like to be Christopher, whether that means amplifying his emotional state, creating his environment, or portraying the people he interacts with. They disrupt other theatrical norms as they become the set, the props, and ingeniously facilitate the sound design and scene shifts. It’s a work of true collaboration that I appreciated immeasurably.

Holly Griffith as Judy and Hunter Hnat as Christopher. Photo by Tim Fuller, courtesy of The Rogue Theatre.

Because it was such an ensemble-based show (With an equal gender distribution I might add!), it’s hard to single anyone out. Even so, Hnat as Christopher was inarguably outstanding in the role. His journey of emotional shifts within the autistic lens were raw, instinctive, and credible. Gallagher as Sioban brought warmth and gentleness that counteracted Christopher’s occasionally harsh bluntness. Ryan Parker Knox and Holly Griffith, who portrayed Christopher’s parents Ed and Judy, both brought depth to their characters as they balance the trials of parenting a child with autism and fulfilling their individual needs as human beings. I was equally as impressed with their ability to slip back into the ensemble without fixating on the named characters they played.
The remainder of the cast shifted in and out of secondary characters with similar ease and finesse. Kathryn Kellner Brown rises slightly above the rest with her presentation of Mrs. Alexander, an elderly neighbor that Christopher becomes better acquainted with through his detective work. For me, one of the most memorable moments of her performance was watching Mrs. Alexander walk in front of the stage and the moment she took the first step to rejoin the ensemble onstage, Mrs. Alexander completely disappeared, leaving just Ensemble Voice 6. Samantha Cormier also deserves honorable mention with the deft comedic timing executed during her brief moments as Julie, another one of Christopher’s teachers. These performers are incredibly skilled in their abilities to jump in and out of character and doing so all without leaving the stage further elevates their professional dexterity.
Honestly, I cannot praise the cast enough for the trust they have for one another that inevitably translates into the vulnerability they have with the audience. It’s incredibly refreshing to see this kind of work being done in Tucson and I hope more companies and performers embrace its power in the future.
Meier and her creative team definitely deserve applause for the level of artistry applied to this production. Some of that ensemble work wouldn’t be as impressive without the complimentary lighting effects and the 9 boxes that are utilized throughout as seating, storage, and more tangible amplifications of Christopher. If my descriptions seem vague, it’s because curiosity should get ahold of you and you should make every effort to see this production.
The Curious Incident of the Dog in the Night-Time runs at The Rogue Theatre Theatre November 1st through 18th. Thursday, Friday, and Saturday nights at 7:30; Saturday and Sunday afternoons at 2:00. You can buy tickets online at theroguetheatre.org or by calling 551-2053.