So, it is September; often a time for the end of a summer romance for many. Live Theatre Workshop’s production of Heisenberg, by English playwright Simon Stephens, doesn’t address that theme, but another seasonal one of a May-December coupling. This phrase refers to a woman in the early part of her life, hence May, with a man at least 11 years older in the later part of his life, hence December. Although this is not a new topic, Sabian Trout’s direction, the playwright, and the actors all do a convincing job to present this in a novel way. A woman meets a stranger and gives him a kiss on the back of the neck, and the dance of courtship begins as the play opens. 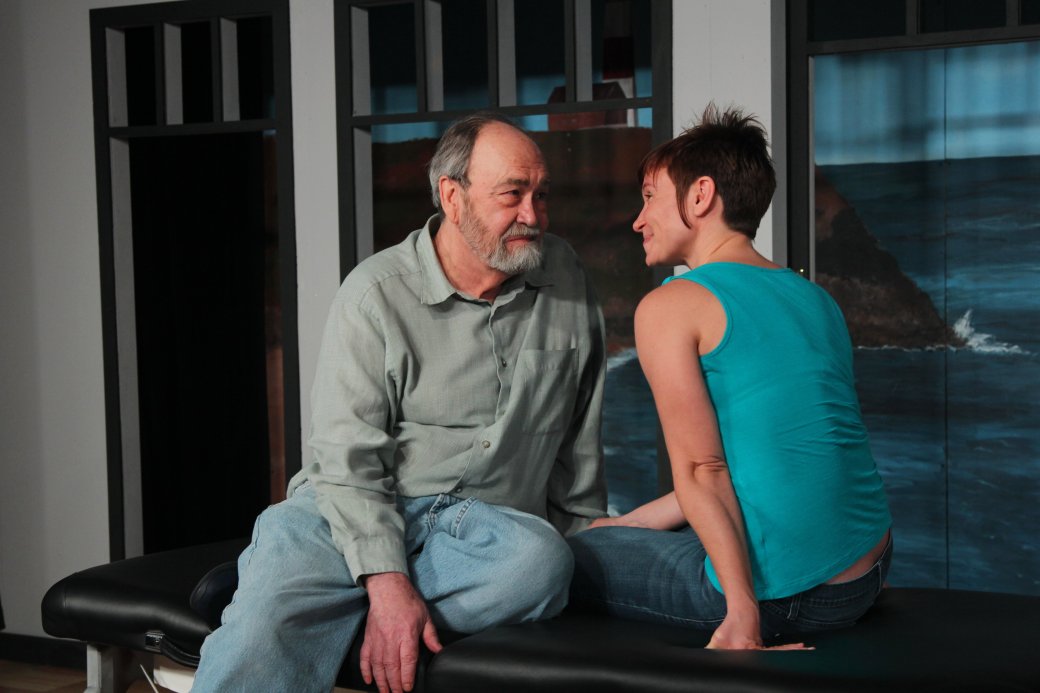 Not often are we privy to those private moments between a couple as they navigate the waters of the early stages of a romance. Yes, we may see them at a party holding hands and gazing lovingly at each other, but we don’t see what happens between the two of them when they are alone. This is what is revealed in Heisenberg. As incongruous as this couple is with a 33-year age difference, Trout did an excellent job casting. Alex, played by Roberto Guajardo, is a 75-year-old Irish butcher who is a lifelong bachelor. Georgie, played by Dallas Tomas, is a gamine, 42-year-old, manic American receptionist. The scene is London today. The set is stark, and the scene changes are done by the actors themselves. Costuming is minimal and yet makes the characters so believable.
With the sparseness of the set, the costumes, and the lack of other characters, we are meant to focus on the couple. Alex appears closed and — in no uncertain terms — tells us he has no use whatsoever for feelings. He is adamant about that. Guajardo is a masterful actor as he reveals to us very slowly and subtly the many layers of Alex’s being. From the stereotypical curmudgeon we meet at the start of the play, he changes to a man who eventually is able to show his vulnerability to Georgie, and also to us. Georgie’s energy is so manic we want to get her to slow down. Gradually, she starts to relax and reveal her true self to us. I loved watching the physicality Tomas embraced as Georgie. It reinforced her childlike innocence as well as capitalizing on her sexuality. Make no mistake, Alex was taken by this, but he also responds to her the more she reveals her authentic self. Without distractions, we are able to focus on just two people discovering who the other is, and gradually, inconceivably, falling for each other. As unimaginable as they appear as a couple at the beginning of the show, as they grow and reveal themselves to each other, and to us, we can see why they are together.
This is where the title Heisenberg comes in. It is never referenced in the play. It alludes to German physicist Werner Heisenberg, who introduced his uncertainty principle of quantum mechanics in 1927. It states that the more precisely the position of some particle is determined, the less precisely its momentum can be known, and vice versa. The Heisenberg reference is seen in the apparent disparity of the couple and their seemingly very different outlooks on the world. As we are introduced to the most unlikely pair and see who they are, we are not quite sure how this romance will turn out.
Yes, this is a story that has been told many times. However, it is still a story worth telling as it deals with a most primal need for all of us. That is the need for love and acceptance wherever we are fortunate enough to find it. As a 70-something woman and actor, I would love to see a show with the age differences reversed with the older character being a woman. Of course, I would love to play the lead character! Again, not a stereotypical boy toy or gold digger as the younger male, but with a genuine human connection between seemingly very different characters. All too often when there is an age difference between a couple, erroneous assumptions are made as to the ulterior motives of, usually, the younger member of the duo. The possibility of a genuine connection between this pairing is rarely seen, but this stereotype is not evident at all in Heisenberg. I loved the show and the reimagining of an oft-told tale. Although the author was male, with a strong female character in Georgie and a female director, I did not feel that this was a male-centric work. The theme that love is love is universal and is one that today still needs to be portrayed.
Heisenberg is playing at Live Theatre Workshop through September 28, Thursday through Saturday at 7:30 PM, and Sunday at 3:00 PM. The phone number is 520 327-4242. Box office hours are Tuesday through Sunday from 1:00 – 5:00 PM. The box office is open on Thursday through Saturday at 6:30 PM. and Sunday at 2:15 PM. Ticket prices are $18-$20 and are also available through the website livetheatreworkshop.org.