Arizona Theater Company brings an all-new production of Cabaret (written by Joe Masteroff with music and lyrics by John Kander and Fred Ebb) to Southern Arizona this winter. Set during the waning days of Weimar Berlin and the Nazis’ rise to power, Cabaret is a deliberately timed choice for ATC. Its warnings about noxious populism and apathy in the face of evil resonate strongly today. This production, directed by Sara Bruner, choreographed by Jaclyn Miller, and with music direction by Jesse Sanchez, is an ambitious undertaking. This is in part because of the heavy themes, but also because any new production inevitably invites comparison to its predecessors—particularly the 1972 film, directed by Bob Fosse and featuring his iconic choreography, with Oscar-winning performances by Liza Minnelli as Sally Bowles and Joel Grey as the Emcee. 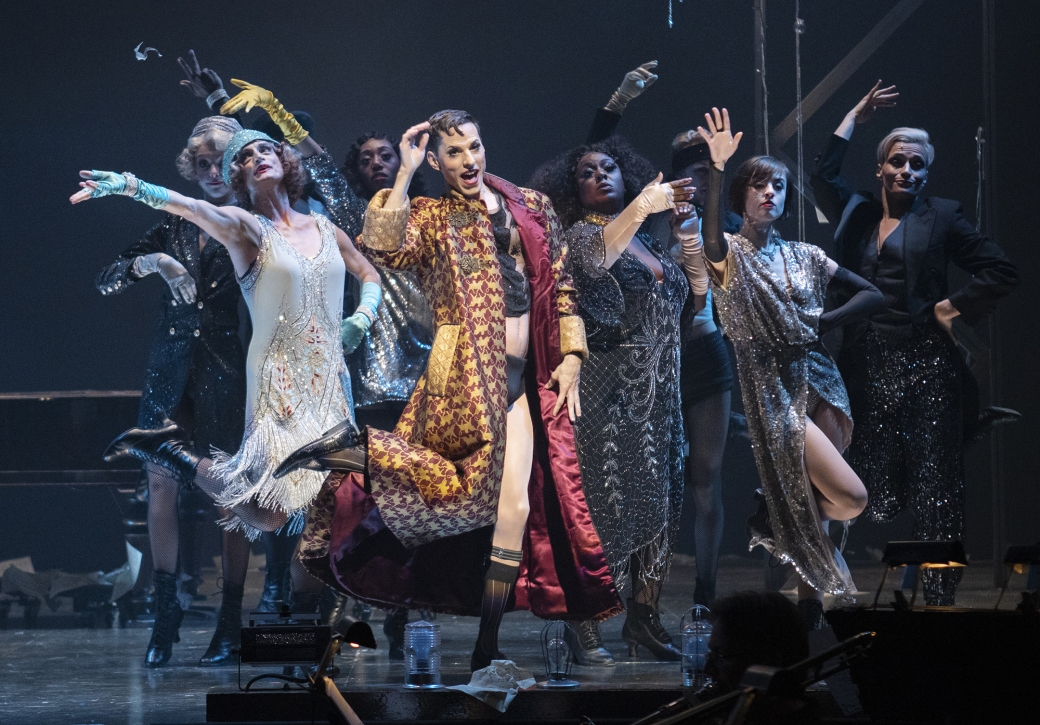 Sean Patrick Doyle as the Emcee and the cast of Cabaret. Photo courtesy of Arizona Theatre Company.

On New Year’s Eve, the Emcee (Sean Patrick Doyle) welcomes the audience to the Kit Kat Klub, and introduces the club’s dancers and its English star, Sally Bowles (Madison Micucci). Meanwhile, American writer Clifford Bradshaw (Brandon Espinoza) has just arrived in Berlin, hoping to find inspiration for his next novel. Cliff’s new acquaintance Ernst Ludwig (D. Scott Withers) helps him find a room to rent from Fräulein Schneider (Lori Wilner). One of his new neighbors is Fräulein Kost (Michelle Dawson), a sex worker whose professional activities Fräulein Schneider begrudgingly tolerates. Another tenant is Herr Schultz (David Kelly, who doubles as Max), a gentlemanly Jewish widower who wishes Cliff mazel and welcomes him to Berlin. Later, Cliff finds himself in the Kit Kat Klub and meets Sally, who invites him to her dressing room. Cliff is charmed by Sally’s worldliness and vivacity, which gets a boost from her coke and gin habit. The next day, after having been thrown out by Max, the owner of the Kit Kat Klub and her now ex-lover, Sally shows up at Cliff’s flat with luggage in hand, and after much cajoling persuades both Cliff and Fräulein Schneider to let her stay.

The remainder of the first half follows the parallel love stories of Cliff and Sally, and Fräulein Schneider and Herr Schultz. The Emcee and the Kit Kat Klub performers serve as a Greek chorus, commenting on the action through comic, sexually-charged nightclub acts that grow increasingly dark in tone, hinting at tragedy to come. Things seem to be going well for everyone—until a shocking revelation disrupts this circle of characters, and makes the Nazis’ power impossible to ignore any longer.

Ultimately, ATC’s Cabaret hits the mark in many areas, but misses in others. Madison Micucci is “perfectly marvelous” as Sally. Her energy is electric from the first moment she appears on stage until her devastating performance of the climactic title song. She captures Sally’s pluck and underlying fragility, and manages to make her sympathetic even in her most destructive and infuriating moments. While the show as a whole is not always convincing in its effort to convey the gritty decadence of 1930s Berlin, Micucci’s large, pain-tinged voice takes us there. Her solos “Maybe This Time” and “Cabaret” are the show’s strongest numbers. Lori Wilner as Fräulein Schneider is another standout. In addition to her powerful singing, Wilner delivers a subtle and nuanced portrayal of the show’s most fully realized character. Fräulein Schneider is given some of the show’s most shattering lines, and Wilner makes you feel the full weight of them.

Sean Patrick Doyle, angular and lithe, is well cast as the Emcee. His strongest moment is his second-act solo “I Don’t Care Much,” which he sings in a haunting falsetto, made more tragic by his mascara-streaked face and imploring, satin-gloved gestures. Still, I never found him completely convincing in this role; his performance lacks the menacing undercurrent needed to convey the creeping dread of the increasingly alarming political situation unfolding outside the nightclub. And while I was happy to see a diverse ensemble, with some welcome gender swapping in the casting, the dance and vocal talents of the Kit Kat Klub girls and boys were underutilized. The stage design is clever and there are some smart lighting choices. The lurid green lighting during “Cabaret” is a particularly effective, capturing the poisonous atmosphere and echoing the fact that green is Sally’s signature color. Nevertheless, in general the nightclub scenes, in part because of rather uninspired costuming, struck me as too clean, too bright, and too wholesome. I was disappointed by the way this production seems almost to shy away from the overt homoeroticism and seedy sensuality of the material. As a result, the fear the cast projects in the finales of both acts feels unearned.

That said, what this production does well is show how easily and quickly evil can proliferate when people aren’t paying attention. The characters go about their lives ignorant of the intensifying danger in their midst until they are forced to face it, with tragic consequences. When Cliff calls out Fräulein Schneider for giving in to despair instead of fighting for her values, she retorts, “What would you do?” In our time of deepening social divisions and eroding political norms, “what would you do?” is a question that should haunt us all.

Cabaret runs at Tucson’s Temple of Music and Art through December 29th, and in Phoenix January 4th through 26th. Tucson tickets are available at www.arizonatheater.org or by calling (520) 622-2823.